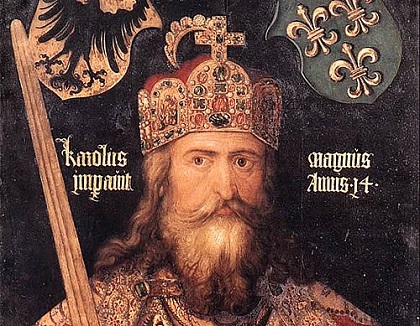 Charlemagne inherited the Frankish crown in 768. During his reign (768-814), he subdued Bavaria, conquered Lombardy and Saxony, and established his authority in central Italy. By the end of the eighth century, his kingdom, later to become known as the First Reich (empire in German), included present-day France, the Netherlands, Belgium, and Luxembourg, as well as a narrow strip of northern Spain, much of Germany and Austria, and much of the northern half of Italy. Charlemagne, founder of an empire that was Roman, Christian, and Germanic, was crowned emperor in Rome by the pope in 800.

The Carolingian Empire was based on an alliance between the emperor, who was a temporal ruler supported by a military retinue, and the pope of the Roman Catholic Church, who granted spiritual sanction to the imperial mission. Charlemagne and his son Louis I (r. 814-40) established centralized authority, appointed imperial counts as administrators, and developed a hierarchical feudal structure headed by the emperor. Reliant on personal leadership rather than the Roman concept of legalistic government, Charlemagne’s empire lasted less than a century.

A period of warfare followed the death of Louis. The Treaty of Verdun (843) restored peace and divided the empire among three sons, geographically and politically delineating the approximate future territories of Germany, France, and the area between them, known as the Middle Kingdom. The eastern Carolingian kings ruled the East Frankish Kingdom, what is now Germany and Austria; the western Carolingian kings ruled the West Frankish Kingdom, what became France. The imperial title, however, came to depend increasingly on rule over the Middle Kingdom. By this time, in addition to a geographical and political delineation, a cultural and linguistic split had occurred. The eastern Frankish tribes still spoke Germanic dialects; the language of the western Frankish tribes, under the influence of Gallo-Latin, had developed into Old French. Because of these linguistic differences, the Treaty of Verdun had to be written in two languages. 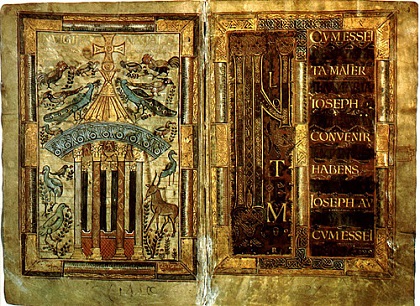 Not only had Charlemagne’s empire been divided into three kingdoms, but the East Frankish Kingdom was being weakened by the rise of regional duchies, the so-called stem duchies of Franconia, Saxony, Bavaria, Swabia, and Lorraine, which acquired the trappings of petty kingdoms. The fragmentation in the east marked the beginning of German particularism, in which territorial rulers promoted their own interests and autonomy without regard to the kingdom as a whole. The duchies were strengthened when the Carolingian line died out in 911; subsequent kings would have no direct blood link to the throne with which to legitimate their claims to power against the territorial dukes.