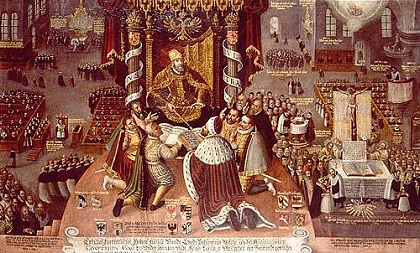 By the early 1550s, it was apparent that a negotiated settlement was necessary. In 1555 the Peace of Augsburg was signed. The settlement, which represented a victory for the princes, granted recognition to both Lutheranism and Roman Catholicism in Germany, and each ruler gained the right to decide the religion to be practiced within his state. Subjects not of this faith could move to another state with their property, and disputes between the religions were to be settled in court.

The Protestant Reformation strengthened the long-standing trend toward particularism in Germany. German leaders, whether Protestant or Catholic, became yet more powerful at the expense of the central governing institution, the empire.

Protestant leaders gained by receiving lands that formerly belonged to the Roman Catholic Church, although not to as great an extent as, for example, would occur in England. Each prince also became the head of the established church within his territory. Catholic leaders benefited because the Roman Catholic Church, in order to help them withstand Protestantism, gave them greater access to church resources within their territories. Germany was also less united than before because Germans were no longer of one faith, a situation officially recognized by the Peace of Augsburg. The agreement did not bring sectarian peace, however, because the religious question in Germany had not yet been settled fully.