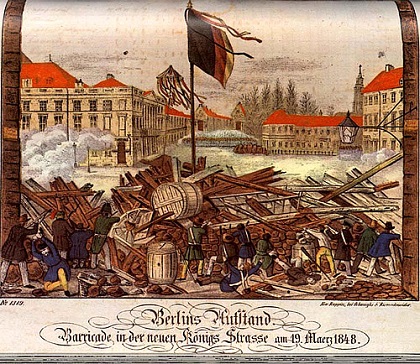 Europe endured hard times during much of the 1840s. A series of bad harvests culminating in the potato blight of 1845-46 brought widespread misery and some starvation. An economic depression added to the hardship, spreading discontent among the poor and the middle class alike. A popular uprising in Paris in February 1848 turned into a revolution, forcing the French king Louis Philippe to flee to Britain.

shaken by uprisings in which crowds consisting mainly of the urban poor, but also of students and members of the liberal middle class, stormed their rulers’ palaces and demanded fundamental reform. Berlin and Vienna were especially hard hit by what came to be called the revolutions of 1848.

The rulers of both cities, like rulers elsewhere, quickly acceded to the demands of their rebellious subjects and promised constitutions and representative government. Conservative governments fell, and Metternich fled to Britain. Liberals called for a national convention to draft a constitution for all of Germany. The National Assembly, consisting of about 800 delegates from throughout Germany, met in a church in Frankfurt, the Paulskirche, from May 1848 to March 1849 for this purpose.

Related articles:
The German Confederation, 1815-66
Economic and Political Trends in Germany Toward Unification
The Restoration of Germany