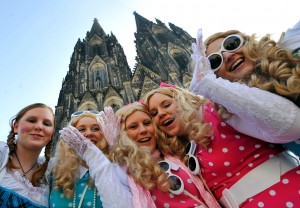 The Cologne Carnival (Kölner Karneval) is a carnival that takes place every year in Cologne, Germany. Traditionally, the “fifth season of the year” (carnival season) is declared open at 11 minutes past 11 on the 11th of the 11th month November. But the real “crazy days” do not start before the so-called Weiberfastnacht (Shrove Thursday), the Thursday before Rosenmontag (Carnival Monday). Learn how to celebrate Carnival in Cologne!

1.Dress?
Don’t come to the “Crazy Days” in a dark suit or in every- day clothes: the color is the order of the day, and red and white are the city colors. Hooped shirts, mini-hats and false noses are available everywhere. With a little make-up and decorated with a few streamers, you will immediately be accepted as one of the natives and declared a temporary inhabitant of Cologne.

2.Kölsch?
Is a dialect, a philosophy of life and a drink. You are bound to enjoy the latter: a top-fermented beer that is part of the Carnival as well as everyday life for real natives of Cologne (this is not to say that drinking is compulsory!). You will probably not understand the Kölsch dialect straight away, but we are tolerant and also speak standard German when we have to, or even English, French or – whatever.

3.D’r Zoch kütt (the parade is coming)
The Rose Mondayparade, which is over seven kilometers long, traditionally goes from St. Severin, past the Cathedral and all the way to St. Gereon, lasts four hours and requires a certain amount of stamina. To find a good spot along the parade route, you should be there up to two ours in advance, unless you have paid for a seat on a grandstand.