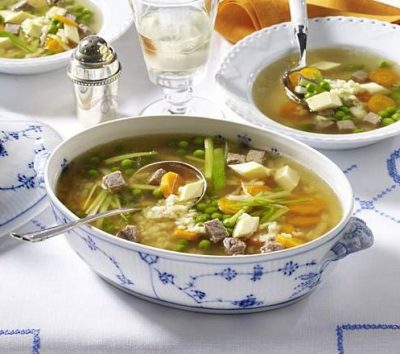 Hochzeitssuppe is eaten in Northern Germany and Southern Germany by the bride and groom and guests, traditionally after the wedding ceremony, and it is usually served as the starter on the menu at the wedding reception. It is also eaten in other regions of Germany, because the Brautsuppe (“bride’s soup”) served to all the guests used to be an element of every wedding. A variation is the Westfälische Hochzeitssuppe (“Westphalian Wedding Soup”), based on beef broth. As you will see, cooking this elaborate dish takes quite some time so it is made on special occasions only.