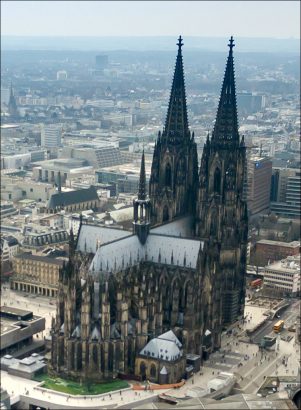 The aerial view of the Cologne Cathedral

Cologne Cathedral (Kölner Dom, officially Hohe Domkirche Sankt Petrus) is a Roman Catholic cathedral in Cologne, Northrhine-Westfalia, Germany. It is the seat of the Archbishop of Cologne and of the administration of the Archdiocese of Cologne. It is a renowned monument of German Catholicism and Gothic architecture and was declared a World Heritage Site in 1996. It is Germany’s most visited landmark, attracting an average of 20,000 people a day, and is currently the tallest twin-spired church at 157 m (515 ft) tall.

The site of Cologne Cathedral has been occupied by Christian churches since about the 4th century. An older cathedral was destroyed by fire in 1248, and immediately thereafter work began on the present cathedral, which was designed in the Gothic style in emulation of French church architecture. The choir was consecrated in 1322, but construction continued until 1560 (or only until 1520, according to some authorities). 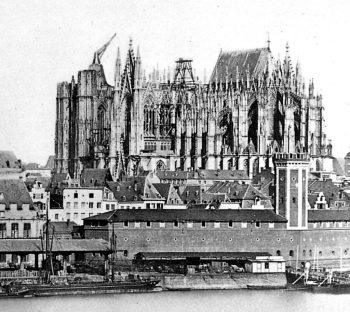 The project then stalled for centuries, with a large wooden crane left standing some 184 feet (56 m) above the ground, at the top of the south tower. During the 1790s, troops of the French Revolution occupied Cologne and used the cathedral as a stable and a hay barn. Restoration work began in the 1820s, spurred on by Sulpiz Boisserée, a German proponent of the Gothic Revival movement. In 1842 a new cornerstone was laid by King Frederick William IV of Prussia, and work to complete the cathedral resumed in earnest. The architects Ernst Friedrich Zwirner and Richard Voigtel carried out the enterprise, guided by architectural drawings made in about 1300. Construction finally ended in 1880. 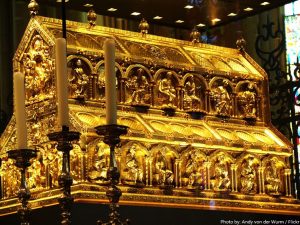 Shrine of the Three Kings

The art treasures of Cologne Cathedral are many and varied. Near the high altar is the massive gold Shrine of the Three Kings, containing what are said to be relics of the Magi who attended the infant Jesus. The shrine, a masterpiece of medieval goldwork, was begun by the noted goldsmith Nicholas of Verdun in 1182, completed in about 1220, and originally installed in the predecessor cathedral. The altarpiece in the Lady Chapel (on the south wall of the choir) is a triptych entitled The Adoration of the Magi (c. 1445), which was made by Stefan Lochner, one of the outstanding painters of the Cologne school. The cathedral’s oldest stained-glass windows were crafted in the 13th century. 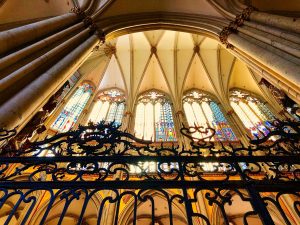 Stained-glass windows in the Cologne Cathedral

More modern in style is an immense stained-glass window by the Cologne-based artist Gerhard Richter, completed in 2007 as a permanent replacement for 19th-century glass that was destroyed in World War II. Richter’s window consists of more than 11,000 square panes in 72 solid colors, arrayed seemingly at random within the many-mullioned window.

Some facts about the Cologne Cathedral: 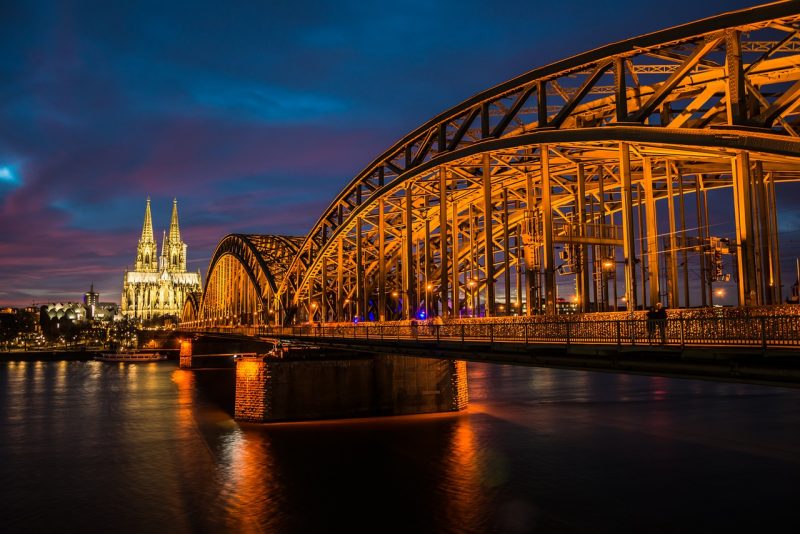