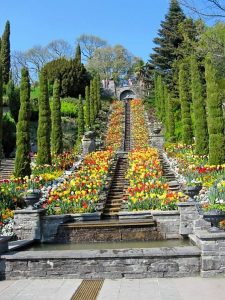 The Flower Island of Mainau in Lake Constance may only cover 45 hectares of land, but it is home to an extraordinary diversity of trees, flowers and shrubs. Its other attractions include a 13th century baroque palace, a palm house and the biggest butterfly house in Germany.

Mainau Island lies just off the shores of Lake Constance in Baden-Württemberg in the far south-west of Germany, close to Switzerland and Austria. With more than a million visitors every year, it has become a major attraction in this trilateral border region. Its mere 45 hectares are home to an extraordinary diversity of flowers, trees and shrubs. Among the particular treasures are rare and often very old trees, for example the Viktoria lime, planted by the grand duke in 1862 to mark the birth of his daughter, or the bizarrely knotted pagoda tree, also around 150 years old. Many mighty oaks and proud cedars provide the park with a graceful silhouette. 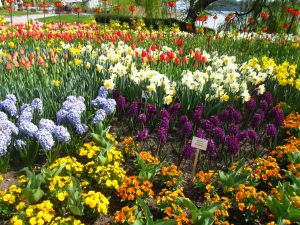 Mainau, nicknamed “The Flower Island,” is the most popular tourist attraction on Lake Constance (a.k.a. the Bodensee). The small island, which is about 5 km or 3 miles from the city of Konstanz, has a semitropical climate that inspired Prince Nikolaus von Esterházy to create a botanical garden in the first half of the 19th Century. Later, under Grand Duke Friedrich I, the gardens were expanded with an arboretum, an Italian rose garden, and other features that visitors enjoy today.

Another typical feature of Mainau is its wealth of plants in pots and tubs and its impressive collection of citrus fruit. The marvelous baroque palace can be seen from afar high above the treeline. Restored under Count Bernadotte, it dates back to the Teutonic Order of Knights, who owned the island for almost 500 years from the 13th century. 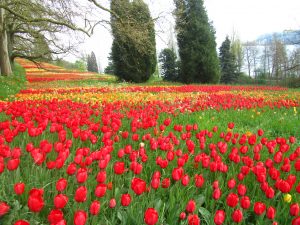 Firm favorites with the public include the palm house, with its collection of 1,200 orchids, and the largest butterfly house in Germany, which contains 1,000 examples of exotic species. Other attractions on Mainau island include the palace church of St. Mary, a gem of the south-German baroque, and the Italian rose garden, laid out in 1871 for Grand Duke Friedrich I of Baden. From June to August around 9,000 roses of nearly 400 varieties blossom into flower here. The Lake Constance region offers a range of cycle routes and walking trails, and the Friedrichshafen Zeppelin Museum features a partial replica of the Hindenburg measuring 33 m in length that you can actually walk around. Another option is Meersburg Castle from the 7th century – the oldest castle in Germany.

In the 1930, Prince Wilhelm (then the island’s owner) turned the administration of Mainau over to his son, the Swedish Prince Lennart Bernadotte II. The prince, who had renounced his Swedish royal lineage after marrying a commoner, devoted the rest of his life to turning the island into a privately-operated park. Mainau is now maintained in perpetuity by a foundation that the prince and his second wife established, and the island’s manager is their daughter, Countess Bettina Bernadotte. Their son, Count Björn Bernadotte, manages the foundation.