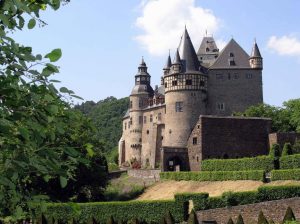 The castle of Bürresheim is located at northwest of Mayen on a rock spur in the Nettetal. It belongs to the local church Sankt Johann. Together with Burg Eltz and the castle Lissingen, it is one of the few castles in the Eifel that were never conquered or devastated and were able to survive unscathed the wars of the 17th and 18th centuries as well as the social upheavals of the French Revolution.

The castle consists of buildings constructed between the twelfth and the seventeenth century. Almost all of it is original, including the twelfth century keep, which is the oldest part. The castle was never taken or raised or slighted (unlike almost all other Rhine castles). It featured in the film Indiana Jones and the Last Crusade, in which it was called Brunwald Castle.

Built in the 12th century, Bürresheim was first mentioned in 1157 with its former owners, the noble Eberhard and Mettfried “de Burgenesem”.

Shortly before 1189, Eberhard’s son Philipp sold his share to the archbishop of Cologne, Philip I von Heinsberg, in Cologne, only to receive it back from him as a fief. The archdiocese of Trier recognized the importance of the arrangement and acquired the other half of the former castle under Archbishop Henry II of Finstingen. The governors of Leutesdorf took over the fief of Cologne in 1359 from their last representative of Bürresheim, while the Trier part came to the Lords of Schöneck. Bürresheim became the Ganerbenburg in the 14th century. The von Schönecks did not remain long owners, because as early as 1473 Kuno von Schöneck and his son sold their part of the castle and rule Bürresheim to Gerlach von Breidbach, whose son Johann 1477 could also acquire part of the Leutesdorf fief. The rest of the castle part of the governors arrived at the beginning of the 16th century to Emmerich von Lahnstein.

In 1796 the family tree died with the death of the last male heir, Franz Ludwig Anselm Freiherr von Breitbach-Bürresheim, the chief officer of Koblenz and Ehrenbreitstein, who died escaping from the French troops. Castle Bürresheim was inherited by a grandson of the sister of the last Breidbach on Bürresheim, the Count Klemens Wenzeslaus of Renesse, whose descendants continued to live in Castle Bürresheim. After the last resident had died in 1921 in a car accident at the age of 32 and only 11 days after her wedding, the castle was inherited by the family of Count Westerholt. Due to unfortunate circumstances, 17 years later he was forced to sell castle Bürresheim complete with the equipment to the Provincial Association of the Prussian Rhine Province. The castle remained in its possession until it came into the care of the “State Palace Administration of Rhineland-Palatinate ” in 1948, which it handed over in 1998 to her successor organization ” castles, palaces, antiquities Rhineland-Palatinate”.