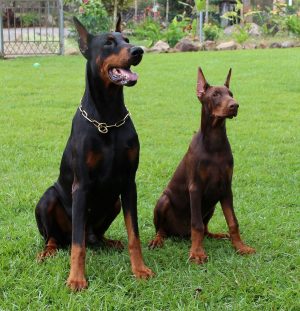 Doberman  is a medium-large breed of domestic dog originally developed around 1890 by Karl Friedrich Louis Dobermann, a tax collector from Germany, for his own protection. Here’s how it happened.

In 1890, Karl Friedrich Louis Doberman was a tax collector in Apolda, Germany. Unsurprisingly, he wasn’t very popular. But luck was on his side: he owned the local dog pound, where he was able to combine a long list of breeds to create a guard dog to protect him. After combining big, fearsome breeds like the German Pinscher, Rottweiler, Greyhound, Great Dane, Weimeraner, German Shorthaired Pointer, Old German Shepherd Dog, and more, Doberman created his prototype: a dog that was strong, fast, durable, loyal, intelligent, and, when he needed to be, ferocious.

After years of development, the end result was what we know today as the Doberman Pinscher, named after the breed’s creator. Made an official breed in the United States 1908, the Doberman has a long history of military and police service. He served as the official War Dog of the US Marine Corps during World War II as a sentry, messenger, and the breed was made famous for its role in Pacific battles in Okinawa and Guam. The Doberman was also used for search-and-rescue when the World Trade Center towers collapsed in 2001. 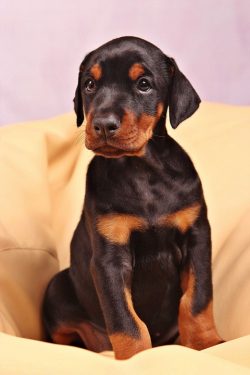 Now it is one of the most loving, loyal, and protective pets a family can have.

The Doberman has a long muzzle and stands on its toes (not the pads) and is not usually heavy-footed. Ideally, they have an even and graceful gait. Traditionally, the ears are cropped and posted and the tail is docked. However, in some countries it is illegal to do so. Dobermans have markings on the chest, paws/legs, muzzle, above the eyes, and underneath the tail.

Dobermans are well known as intelligent, alert and tenaciously loyal companions and guard dogs. Personality varies a great deal between each individual, but if taken care of and trained properly they tend to be loving and devoted companions. The Doberman is driven, strong and sometimes stubborn. Owning one requires commitment and care, but if trained well, they can be wonderful family dogs. With a consistent approach they can be easy to train and will learn very quickly. If properly trained, they can be excellent with children.

This athletic dog needs brisk walking every day and all-out running as often as possible. Too little exercise and too little companionship can lead to restlessness and other behavioral problems. Mental exercise (advanced obedience, agility, tracking, Schutzhund) is just as important to this thinking breed. 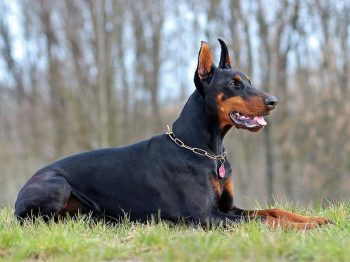 Though some Dobermans are big softies who love everyone, most are reserved with strangers and protective of their family. Early and extensive socialization is mandatory to avoid either shyness or sharpness. Some Dobermans are dominant with other dogs. Some are confirmed cat chasers, while others love small animals.

Some excel in advanced obedience competition, while others are hardheaded and will test to find their place in the pecking order. Calm, consistent leadership is a must, and obedience training must be upbeat and persuasive rather than sharp. This breed does not tolerate teasing or mischief.