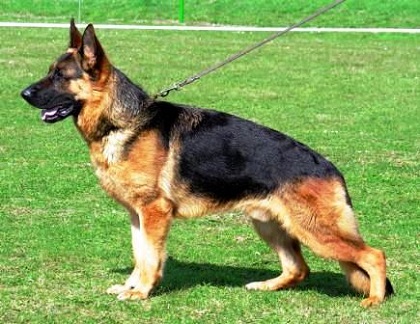 “The most striking features of the correctly bred German Shepherd are firmness of nerves, attentiveness, unshockability, tractability, watchfulness, reliability and incorruptibility together with courage, fighting tenacity and hardness.”
– Max von Stephanitz, Father of the German Shepherd Dog

This dog breed is only about 100 years old. The breed was originated by Captain Max von Stephanitz. Captain von Stephanitz, of the German infantry, bought sheep-herding dogs (many of them field trial winners) from all over Europe in the late 1800’s and early 1900’s and bred them together to create his ‘ultimate service dog’. He started a registry and stud book. His favourite dog, Hektor, was 1/4th wolf. All the dogs originally imported to the UK & America were proudly traced back to him. After WWI, British and American soldiers, impressed by the abilities of the dog, brought home examples to breed. The breed instantly become popular, both as a family pet and as a working dog. Shortly thereafter, the German Shepherd Dog’s (GSD) name was changed to Alsatian Wolf Dog. Their popularity soared for a while, then fell tremendously as the media sensationalised every remotely negative event that occurred associated with a canine with the word ‘wolf’ in it. There were arguments like this – was the Alsatian Wolfdog the best working / most capable / most intelligent dog that ever walked the face of the earth OR was Alsatian Wolfdog the unpredictable / livestock eating / human attacking beast from hell? The name was eventually changed back in 1977 to German Shepherd Dog, and the GSD soon reached its peak at the top of the most popular dog list.

Von Stephanitz created the Verein für Deutsche Schäferhunde, or SV, as the official governing body for the breed. The SV then created the Schutzhund trial as a breed test for the German Shepherd Dog, and prohibited the breeding of any dog which could not pass the trial. The purpose of Schutzhund training is to assess and mold the dog’s natural abilities to track, protect, and teach the dog control through obedience. It has been considered by some to be a test for breeding in that during the training the degree to which the dog possesses these working abilities becomes apparent.
The German Shepherd Dog is a large, strong, substantial-looking dog. The fur is a double-coat and can be either short or long haired. It varies in color, coming in many different shades, mostly cream (tan) and brown, but also solid black or white. Dogs with coats that have tri-colored hair (ie. black, brown, red, or white) are called sable or agouti. Different kennel clubs have different standards for the breed according to size, weight, coat color and structure. The GSCs have an average life span of ten to twelve years.

The German Shepherd Dog is an intelligent breed of dog. Because they are eager to please, they are easily trained in obedience and protection. German Shepherd Dogs are often used as working dogs in many capacities, including search and rescue (SAR), military, police or guard dogs. They are also used as assistance dogs / service dogs (such as guide dogs). The original purpose for the German Shepherd, was (not surprisingly) to herd sheep, cattle or any other animal that may require the assistance of a shepherd. Even given the name “shepherd” some people are surprised to hear that these dogs were bred for herding, as the GSD is more often found working as a guard dog, police dog or companion pet than in the field working sheep.

The German Shepherd does not have the “eye” as border collies or other similar breeds. They are trained to follow their instinct, which for the GSD is to “work the furrow”, meaning that they will patrol a boundary all day and restrict the animals being herded from entering or leaving the designated area. It is this instinct that has made the breed superb guarding dogs, protecting their flock (or family) from harm. Your German Shepherd will try to “herd” you and your family. Often they will “follow ahead”, walking in front of you and looking back to make sure you are going where you should. Although the German Shepherd is not used as frequently for herding in present time, there are many breed lines still known for their herding. The breed is naturally loyal, intelligent and protective (which makes it good for police work). German Shepherd has an excellent nose, making it good for tracking and search and rescue work. German Shepherd Dogs are calm and have a steady temperament when well-bred which is why they have been used as “Seeing Eye” dogs. A German Shepherd thrives on regular exercise, mental stimulation and a well-balanced diet.