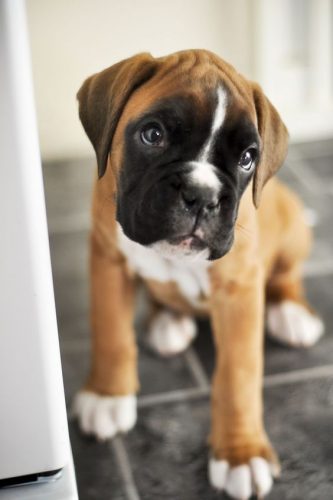 The Boxer is a medium-sized, short-haired breed of dog, developed in Germany. The coat is smooth and tight-fitting, colors are fawn or brindled, with or without white markings, and white. Boxers have broad, short skulls, have a square muzzle, an underbite, very strong jaws, and a powerful bite ideal for hanging on to large prey.

Boxer was bred in Germany from a now-extinct and larger breed of dog called the Bullenbeisser and the Bärenbeisser, commonly used for hunting. When crossed with the English Bulldog (as a result, they have the characteristic square jaw and squared shoulders), the breed was first brought to show in the 1890s.

These dogs were used by German forces during the world wars as guard dogs and couriers. Besides, their function was to pull carts, to fight and to round up livestock. They later became popular theater and circus dogs.

The breed became internationally popular in the 1950s.

Nowadays Boxers are very useful as police dogs as well as service, guide and therapy functions. Boxers have a wide use in military work too. An excellent watchdog, the Boxer will restrain an intruder. They are extremely athletic. This dog needs to go on a daily pack walk. Daily mental and physical exercise is important. They are easy to train (to socialize). This breed typically lives for 10 to 12 years. 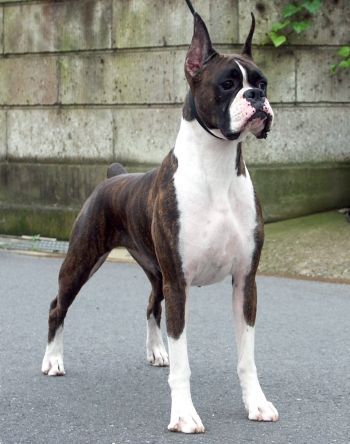 The Boxers’ body is compact and powerful with square-shaped proportions. This popular breed of dog is mid-sized (size: 21 – 25 inches, weight: 53 – 70 pounds). They have round, brawny necks that are well-muscled. The head is in proportion with the body. Their front limbs are straight and their tails are carried high. They have long, muscular legs and deep chests for resonant barking. The tails of this breed are usually docked.

The nose is large and black with very open nostrils. The Boxer’s glossy, close-fitting, short-haired coat can be fawn, brindle, red, white, tan, mahogany, and black often with white markings. Dark markings are very likely around the face and eyes. The eyes are dark brown. The ears are set high, either cropped or kept natural, very often surgically altered to make them stand up.

The main features of a Boxer’s temperament are: 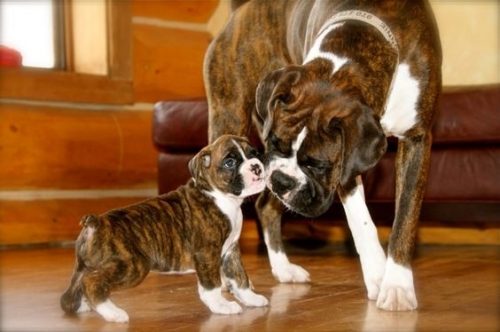 Boxers are known to jump up and use their front paws as if they are boxing.  It is one of the reasons of the breed’s name. Boxers like to use their front paws to get into things and move things from place to place, they like to have people’s attention and are also known as the “clown of dogs”. The Boxer’s nature is to protect its owner and his family, they are excellent family pets. These dogs are always eager to work and play. Human leadership is necessary for Boxers. This breed is good for competitive obedience.

They should be trained and properly socialized from the young age. This breed requires a dominant owner and firm, regular training. The main aim is to achieve a pack leader status. Boxers should be sure that all other humans are higher up in the order than the dog. That is the only way to succeed. If they do not take their owner seriously they will be sneaky and hard to control.