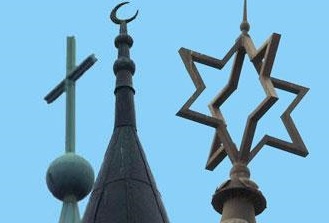 A Real German is either Catholic or Protestant, unless he/she is not. AMEN. How do you find this out? At the very latest, when you apply for your Tax Card. In Germany you get taxed for being a Christian, a Jew or a Moslem. But this doesn’t bother Real Germans, because it’s better to be a Christian than being an “Other”. Why? Because you can avoid unpleasant discussions with the personnel manager during your job interview if you have to explain why you are an “Other”. Make it easy on yourself, as a Real German, and be Christian, that way, there will be no questions asked.
But even if they are not, when their children reach a certain age they will of course become Catholic or Protestant – because what better excuse is there for Real German Families to get together and celebrate?

Actually not many Real German Christians spend that much time, other than on Sunday, if and when they go to church, thinking about or talking to God or Jesus. Actually there are only four major times a German deals with the church.

CHRISTENING
There is no such thing as baby showers in Germany, because if there were, they wouldn’t have big Christening parties. The biggest decision the new parents have to make, is who gets to (or has to) be the God Father and/or Mother. In some families there are scabbles of who gets the honor, and others they have to draw straws of who gets the duty.

Whoever gets picked is then the lucky vice-guest-of-honor for the Christening, and gets to be the lucky aunt or uncle who has to fork out the most money for all of the kid’s birthdays, Christmas and Easter presents. Once they used to pick these people on their ability to raise the child in the event of the accidental death of the parents. These days, they pick them based on the most loaded relative in the family tree, because the family expects the biggest present from the God Father and/or Mother every holiday. Should this honored person dodge his obligation at any birthday or Christmas, he or she will enrich the family gossip for years, and need not bother coming to family celebrations in the future. I have escaped this dubious duty several times, simply based on the fact that I have never been christened myself, and thus do not qualify to be a God Mother.

CONFIRMATION / COMMUNION
For the first few years of a Real German’s life, he or she has little contact with the church, unless his parents are particularily religious. Then we they start school they receive religion as a mandetory subject in school. Why?

Because the school has a copy of the parents records, which noted that on the parents’ tax card, the parents admitted being Christian. This automatically condemns junior to learn all about Jesus and his pals, and to teach young children that you can actually kill someone when you hammer nails in someone’s hands and feet and hang him up on a cross to dry in the sun. At some point or other, the church will requires a belief commitment from their new sprouts, which leaves some young people in doubt, and start to worry (really German!).

Needless to say, somewhat older children will be consulted if this is a good idea or not. The consultation must go sometime like this, “Ya just do it. The whole family will smother you in cash and presents.” Suddenly it dawns in the young Real German’s mind that he can combine religious rituals with the affordability marketing principles for obtaining that Pokemon game Mom refuses to buy. When the young generation of Real Germans become Protestants and Catholics, they drop all their coolness and allow themselves to be decked out in pretty white lacy dresses and very smart suits for the occasion, and learn quite a few uncool Bible verses and such, and behave in a rather uncool way for the duration, and on the special day they collect quite a tidy heap of pocket money from their far-flung relatives, in celebration of the great event, although quite suddenly after the event it is all forgotten and they are once again Cool Kids in crotch-hanging jeans and bare midriffs showing pierced navels and tattoos.