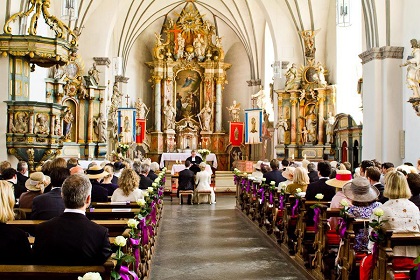 WEDDINGS
For Real Germans, except for an occassional sentimental Christmas Mass visit, there was no reason to visit the Church, unless the day comes where the Real German woman has decided to round up Mr. Right. The Real German Mr. Right usually does not decide to marry in the Church. If it was left up to him, he would rather get married in Barbados in Bermuda Shorts, or in Vegas, or even sky-diving out of an airplane, but in the Church, na ja, it’s kind of stuffy for him.

Real Mrs. German-to-be, however, has already contacted her mother and future mother-in-law about two days after Mr. German Right popped the question. With an absolute planning that is equivalent to Rudi Voeller’s strategy for the World Soccer Club, the three Real German Women have planned the Church Wedding down to a T. Of course not without tons of discussions, phone calls and scabbling. With three Real German Women, they will inevitably have five opinions of how to do the church wedding right. As a female guest to a Real German Wedding, I can only suggest a pant-suit for Catholic Weddings, and a dress for Protestant weddings. The pant-suit is for Catholic Weddings for the extra gymnastics you will be required to perform, so you don’t rip your nylons. The sport program is eliminated in the Protestant Weddings. Drink coffee before you go to the Protestant Weddings, because the Pastor usually has a lot to say, which may not be all that interesting. At any rate, because it lasts a little longer, they have chairs at the alter for bride and groom.

Real German Country Weddings have the bride and groom in traditional costumes, and they play this great hide-and-seek game after the stuffy wedding ceremony. Old boy friends of the bride or the groom’s Verein (Real German Club) Buddies kidnap his bride and the groom has to go from bar to bar or restaurant and look for his bride. It is recommended that the groom has the American Express Gold Card in his wallet, because everywhere he goes he has to spend a free drink for everyone sitting around in the bar.

It’s then no wonder that there are always a number of concerned (and thirsty) people who leave the bar with groom to help him look in the next bar for his bride. My husband once attended a wedding where the bride and her friends had an extraordinary sense of humor. Her old boyfriend kidnapped her and took her to Ibiza. After two weeks, when her newly-wed husband hadn’t made his way from bar to bar all the way down to Ibiza (in Spain), she decided that she would call off the fun, flew home, and to her amazement found the papers filing for divorce in her mailbox.

FUNERALS
The last occassion, and saddest that a REAL German attends church as a guest of honor. Needless to say that at this point, the Real German could care less – but actually it’s all for the benefit of the relatives. Depending on the situation caused by the death, it is either a solemn quiet ceremony, or a painful quiet ceremony. For the usual case, death caused by old age, the ceremony can even be planned in advance, and funeral parlors can be consulted. In some cases the guest of honor has even done some of his own planning, because Real Germans can and do purchase Death Insurance.

Death Insurance is a policy to help pay for the exorbanent costs of a coffin. Being Real Germans, most of them are Christian – especially if they are older and getting closer to death – and do not want to be cremated, but would rather be buried. “Cremation would be too painful” they say. The actual burial services are free – sort of a last present from the state for decades for faithfully paying Church taxes. Non-Christians have to pay for being buried in a Church graveyard – an issue that is being debating in the German Supreme Court. Showing too much emotion at a funeral is embarrassing for Real Germans. They, like other Europeans wear black or dark colors (if they have them), and bring flowers, and wear sunglasses. Usually they do not have open-coffin ceremonies, and tend to have simple coffins. The last gesture that the guests have to perform is to throw a handful of dirt on the coffin together with the flowers they brought on the coffin, which has been lowered into the ground.

Afterwards, the main surviving relatives have arranged a dinner party in a nearby restaurant, and if the person died of old age, the guests usually try to cheer each other up be telling amusing stories or embarrassing antidocts from the life of the deceased person.
A few days later, the eligant, but often very simple and tasteful granit gravestone is put into place, along with the appropriate bordering. The next of kin have to sign a rental contract for the grave plot, and promise to keep it well-attended, tasteful and attractive, which means that someone always has to be around to make sure the proper flowers, candles, etc. are there, and the shrubs they may have planted do not become larger then the grave itself or the headstone.

As always, there are extensive rules governing how to tend the grave-plot. Needless to say, there are the graveyard police (the Real Germans who seem to be waiting to die) who patrol the graveyard, visiting their deceased spouses and making sure that everyone else’s grave is well-attended. For people who cannot keep up with this work, fortunately there are gardener services, who will take over this chore for a price. And after 25 years of this tedious immaculate weeding of the graveyard plot, the bulldozer comes along and digs up the graveyard plot, so that it can be used by the new dead.