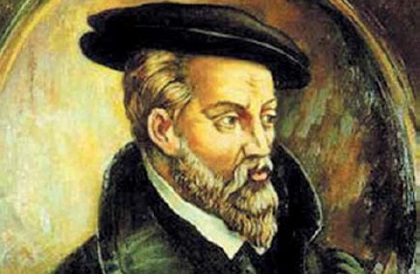 Death of Georgius Agricola (original name, Georg Bauer) in Chemnitz, Germany. Agricola was a humanist, physician and scientist who is often called “the father of mineralogy”. He was one of the first to base his science on the observation of nature rather than speculation. The American president Herbert Hoover (himself a mining engineer) said of Agricola that he was, “the first to found any of the natural sciences upon research and observation, as opposed to previous fruitless speculation.” Agricola studied humanities at the University of Leipzig and science and medicine in Bologna, Padua and Venice. During his lifetime he was a physician, mining engineer and mayor. Among his works are De re metallica (1556 posthumous), De natura fossilium, De natura eorum quae effluunt ex terra (1546) and De ortu et causis subterraneorum (1546).

Birth of Friedrich Schleiermacher in Breslau, Prussia (now in Poland). In his youth Schleiermacher belonged to the Herrenhuter, a pietistic society. Upon leaving home he studied at the University of Halle. His study of theology was accompanied by in-depth study of Kant. Upon completion of his studies he became a pastor. While serving near Berlin he became friends with some of the leading Romantic writers. That association led in Schleiermacher and in his literary friends to a sense of blending of religion and art. In 1810 he became a professor of theology at the University of Berlin. Works by Schleiermacher include, Der christliche Glaube, Die Weihnachtsfeier, and Über die Religion.

Suicide of Heinrich von Kleist (1777-1811) in Berlin, Germany. Kleist was one of the outstanding writers of the 19th century. He read deeply of Kant early on and found many emotional conflicts in his attempts to realize Kant’s ideals. One sees much of these conflicts in Kleist’s writings. Among Kleist’s works are, Robert Guiskard, Amphitryon, Der zerbrochene Krug, Das Kätchen von Heilbronn, Michael Kohlhaas, and Prinz Friedrich von Homburg. Kleist committed suicide in Berlin on the banks of the Wannsee in 1811.

Birth of Friederich Weyerhaeuser in Saulheim, Germany. Weyerhaeuser immigrated to the United States at age 18. After working for a number of years in a sawmill, he began to invest. As his holdings grew he began to buy stands of timber in increasing quantities. His biggest deal was with his neighbor James J. Hill while living in St. Paul, Minnesota. In 1900 he bought 900,000 acres of timberland from Hill in the Pacific Northwest and from it founded the Weyerhaeuser Timber Company.

In the face of a growing liberal revolution in the Austro-Hungarian Empire, Felix Fürst zu Schwarzenberg is appointed chancellor and foreign minister and is ultimately successful in preserving the empire and restoring absolutist rule.

Birth of Gustav Radbruch in Lubeck, Germany. Radbruch was a jurist and legal philosopher in the neo-Kantian tradition. He proceeded from the idea that law derives from moral values. In his youth he concluded a relativism from this (justice is relative to time and place). After the Nazi experience, however, he became much more interested in certain absolute principles within natural law.

Death of Hermann Sudermann in Berlin, Germany. Sudermann was one of the leading writers of the Naturalist period of literature. Noted works by Sudermann include Frau Sorge, Die Ehre, Heimat, Es lebe das Leben and Der gute Ruf.

Death of Leopold Graf von Berchtold in Csepreg, Hungary (born in Vienna, Austria). Berchtold was the foreign minister of Austria-Hungary who presented an ultimatum to Serbia in 1914 after the assassination of Franz Ferdinand with such terms that Serbian rejection was assured. (He sought a preventive war with Serbia.) The subsequent conflict between Austria-Hungary and Serbia ignited World War I.