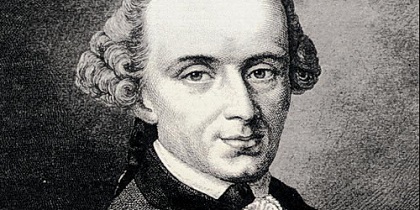 Immanuel Kant (April 22, 1724 – February 12, 1804) was a German philosopher whose comprehensive and systematic work in epistemology (the theory of knowledge), ethics, and aesthetics greatly influenced all subsequent philosophy, especially the various schools of Kantianism and idealism.

Kant was one of the foremost thinkers of the Enlightenment and arguably one of the greatest philosophers of all time. In him were subsumed new trends that had begun with the rationalism (stressing reason) of René Descartes and the empiricism (stressing experience) of Francis Bacon. He thus inaugurated a new era in the development of philosophical thought.

Kant was born in and lived his entire life in Königsberg. His father, a saddler, was, according to Kant, a descendant of a Scottish immigrant, although scholars have found no basis for this claim; his mother, an uneducated German woman, was remarkable for her character and natural intelligence. Both parents were devoted followers of the Pietist branch of the Lutheran church, which taught that religion belongs to the inner life expressed in simplicity and obedience to moral law. The influence of their pastor made it possible for Kant—the fourth of nine children but the eldest surviving child—to obtain an education.

The Beginning of Literary Activity

From his sixteenth to his twenty-first year, he studied at the university of his native city, having for his teacher Martin Knutzen, under whom he acquired a knowledge of the philosophy of Wolff and of Newton’s physics. After the death of his father in 1746 he spent nine years as tutor in various families. In 1755 he returned to Königsberg, and there he spent the remainder of his life. From 1755 to 1770 he was Privatdozent (unsalaried professor) at the University of Königsberg. In 1770 he was appointed professor of philosophy, a position which he held until 1797.

Kant’s major work, the Critique of Pure Reason (Kritik der reinen Vernunft, 1781), aimed to unite reason with experience to move beyond what he took to be failures of traditional philosophy and metaphysics. He hoped to end an age of speculation where objects outside experience were used to support what he saw as futile theories, while opposing the skepticism of thinkers such as Hume.

In simple terms, Kant pointed out that we all shape our experience of things through the filter of our mind. The mind shapes that experience, and among other things, Kant believed the concepts of space and time were programmed into the human brain, as was the notion of cause and effect. We never have direct experience of things, the noumenal world, and what we do experience is the phenomenal world as conveyed by our senses. These observations summarize Kant’s views upon the subject–object problem.

During the period of his academic career, extending from 1747 to 1781, Kant taught the philosophy then prevalent in Germany, which was Wolff’s modified form of dogmatic rationalism. That is to say, he made psychological experience to be the basis of all metaphysical truth, rejected skepticism, and judged all knowledge by the test of reason. Towards the end of that period, however, he began to question the solidity of the psychological basis of metaphysics, and ended by losing all faith in the validity and value of metaphysical reasoning.

His ideas influenced many thinkers in Germany during his lifetime. He settled and moved philosophy beyond the debate between the rationalists and empiricists. The philosophers Fichte, Schelling, Hegel and Schopenhauer amended and developed the Kantian system, thus bringing about various forms of German idealism. He is seen as a major figure in the history and development of philosophy. German and European thinking progressed after his time, and his influence still inspires philosophical work today.