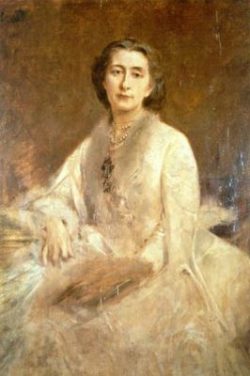 “I had neither mother nor father. Richard was everything to me. He is the only one who has given me love. “ – Cosima Wagner

Cosima Wagner (born December 25, 1837, Bellagio, Lombardy, Austrian Empire [now in Italy] – died April 1, 1930, Bayreuth, Germany), wife of the composer Richard Wagner and director of the Bayreuth Festivals from his death in 1883 to 1908.

Cosima was the illegitimate daughter of the composer-pianist Franz Liszt and the countess Marie d’Agoult. Liszt later legitimatized their births, he also provided generously for their education and, in the case of his daughters, their dowries. With her sister Blandine, Cosima was educated in Paris by the governess of her father’s mistress, Princess Wittgenstein, and then at the house of the mother of Hans von Bülow in Berlin. In 1857 she married Hans von Bülow, one of the outstanding conductors of his time and a favorite pupil of Liszt. But, though she encouraged him in his work and remained devoted to him throughout her life, their marriage proved unsatisfactory. During their honeymoon, along with Liszt she visited Wagner at his home near Zurich. This visit was repeated the following year, when Cosima, on taking her leave, shocked Wagner with an emotional demonstration: “[S]he fell at my feet, covered my hands with tears and kisses … I pondered the mystery, without being able to solve it”. 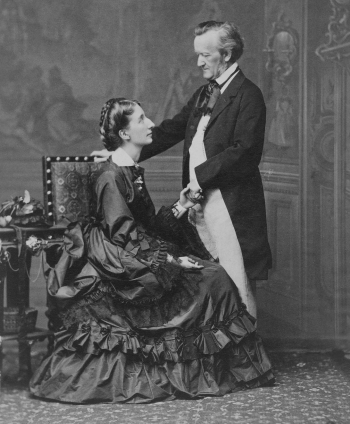 Cosima and Richard Wagner, photographed in 1872 by Fritz Luckhardt

Bülow was committed to Wagner’s music. In 1858 he had undertaken the preparation of a vocal score for Tristan und Isolde, and by 1862 he was making a fair copy of Die Meistersinger von Nürnberg. A social relationship developed, and during the summer of 1862 the Bülows stayed with Wagner at the composer’s home at Biebrich. Wagner records that Cosima became “transfigured” by his rendering of “Wotan’s Farewell” from Die Walküre. In October 1862, just after Blandine’s death, Wagner and Bülow shared conducting duties at a concert in Leipzig. Wagner records that, during a rehearsal, “I felt utterly transported by the sight of Cosima … she appeared to me as if stepping from another world”. In these years Wagner’s emotional life was in disarray. He was still married to his first wife, Minna Planer (she was to die in 1866), and was involved in several extramarital relationships. On 28 November 1863 Wagner visited Berlin. While Bülow was rehearsing a concert, Wagner and Cosima took a long cab ride through Berlin and declared their feelings for each other: “with tears and sobs”, Wagner later wrote, “we sealed our confession to belong to each other alone”. 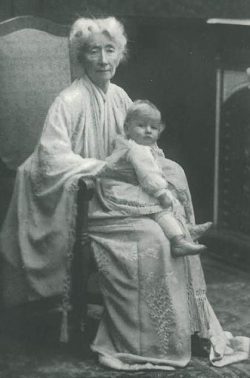 Cosima Wagner in 1917 with her grandson Wieland

She bore von Bülow two daughters. The two daughters subsequently born to Cosima—Isolde (1865) and Eva (1867)—were Richard Wagner’s children. In 1868, Cosima with her four daughters left von Bülow and went to live with Wagner in Tribschen, Switzerland; they were finally married in 1870. In that year Wagner composed the Siegfried Idylle to commemorate the birth of their son, Siegfried (1869–1930).

With the passing of Wagner (1883), she took upon herself the management of the Bayreuth Festivals, of which she was art director until 1908, when her son took over. To this self-imposed task she applied her characteristic energies and her continued devotion to Wagner’s works. She was the moving force behind the festival plays in both commercial and social matters, influencing the selection of repertory, artists, and style of presentation. She died in Bayreuth in total blindness.

Cosima’s life mission was total service to Wagner and his works. In the words of the music critic Eric Salzman she “submitted herself body and soul to the Master”. In Wagner’s lifetime she fulfilled this purpose primarily by recording in her journal every facet of his life and ideas. After his death the journal was abandoned, she would henceforth serve the master by perpetuating his artistic heritage through the Bayreuth Festival. Cosima was also a superb business woman – she succeeded in making the festival first solvent, then profitable.