“I am the most German being, I am the German spirit.”
Richard Wagner 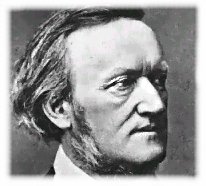 Richard Wagner considered himself to be “the most German of men”. He wrote such great operas as “Tristan und Isolde”, “Parsifal”, “Der fliegende Hollaender”, “Der Ring des Nibelungen”, and others. He actively participated in the revolution of 1849. He had numerous love affairs. He always lacked money and the king Ludwig II was his financial support. “He” – is the great German composer and writer Richard Wagner.

Richard Wagner was born on May 22, 1813, in Leipzig. He was the ninth child of Carl Friedrich Wagner, a police actuary, and Johanna Rosine Wagner. Soon after Richard’s birth his father died, and his mother married Ludwig Geyer, an actor and playwright, whom Wagner suspected to be his real father. From the early childhood Wagner studied and enjoyed music, piano in particular. In the age of 15 Wagner attended a performance of Beethoven’s 9th Symphony which became the profound experience for the boy. He started writing his own music: piano sonatas, overtures and even a Symphony in C major. These works were written copiously, mostly after Beethoven, Weber and Meyerbeer. In 1833 Wagner wrote his first opera, “Die Feen” (“The Fairies”). It was the first in the series of three operas written by Wagner till 1840 – “Das Liebesverbot” (“The Prohibition of Love”)and “Rienzi”, inspired and derived from the works of the German, Italian and French composers accordingly. At that very time Wagner had his first literary experience with the essay “Die Deutsche Opera”. Thus Wagner began the practice of working out a specific theory in print before trying it out in music.

“Der fliegende Hollaender” (1841) was Wagner’s first opera which set him out into a new world of opera, which he called simply drama. With this opera Wagner formed his mature operatic style of composition.

Along with his musical and literary achievements, Wagner had several important appointments: as choirmaster in Wuerzburg (1833), as music director at a traveling theater in Magdeburg (1834), as music director at a theater in Riga (1836). In 1839 he had to leave Riga and his creditors, heading for Paris which became a bitterly disappointing experience to him. Wagner had neither money nor connections which were so important in Parisian life. In 1842 Wagner left Paris for Dresden, where the premiere of “Rienzi” was a formidable success. Wagner was offered the position of co-music director at the Dresden court. For the first time in his life Wagner was financially free.

Wagner took an active part in the revolution of 1848-49. After the revolt was crushed by the Prussians, the police issued a warrant against Wagner, and he fled to Weimar where Liszt arranged his safe transport to Paris. From there Wagner moved to Zurich. Almost immediately he wrote “Die Kunst und die Revolution” (“Art and Revolution”), and “Die Kunst der Zukunft” (“The Artwork of the Future”). The exile lasted for 11 years, till 1860, when Wagner was given a partial amnesty in Germany (except for Saxony). Only in 1862 Wagner was granted the complete amnesty and could safely get back to Germany.

After the succession of favorable events Wagner finally made up his mind to conquer the city of his humiliation – Paris. However Paris was not going to favor Wagner. The chosen opera was“Tannhaeuser”. At the opening night, and also the second and third performances young aristocrats, wishing to humiliate Wagner, created constant disturbances that ruined the opera. “Tannhaeuser”was withdrawn, and Wagner hurriedly left Paris. This was the beginning of the serious financial troubles for Wagner. His personal life was at stake, his friends turned away from him… Due to the increasing debts, he had to flee from Vienna. The year 1864 came to be a great turning-point in Wagner’s life – the new king, Ludwig II, was crowned in Bavaria. Being a great fan of Wagner’s works, the king paid all his debts, settled him in a luxurious villa in Munich, and promised the financial support in future.

Wagner keeps working on the greatest opera of his life – “Der Ring des Nibelungen” (“The Ring of the Nibelungs”), which he started in 1848. Wagner’s dream was to perform “Der Ring…” in a special place where everything would be to his best satisfaction and nobody would stir things up. So, traveling in 1871 through Bayreuth, he decided to build an opera house there. Wagner’s attempts to raise money for this purpose, including the establishing Wagner societies throughout Germany and the request to Bismarck, failed, and king Ludwig II once again granted Wagner funds to cover all the expenses. In 1874 Wagner finished the text and music of the last part of “Der Ring…”, which consists of four parts:“Das Rheingold” (“The Rhinegold”), “Die Walküre” (“The Valkyries”), “Siegfried”, and“Götterdämmerung” (“The Twilight of the Gods”). The first festival opened in 1876 with the performance of “Der Ring…” The Bayreuth Festival was a unique cultural event in Germany, and there were such celebrities among the numerous guests as Friedrich Nietzsche, Edvard Grieg and Peter Tchaikovsky. Despite its cultural success, the festival was a financial disaster. Wagner realized that the next festivals could be held only with the continuous support of the state or at least the societies. The state didn’t provide any support, and the next Bayreuth festival took place only in 1882. This was the last festival in Wagner’s lifetime, because he unexpectedly died of a heart attack in 1883.

However Richard Wagner left a wonderful cultural heritage after him, and the theater in Bayreuth is considered to be his monument.