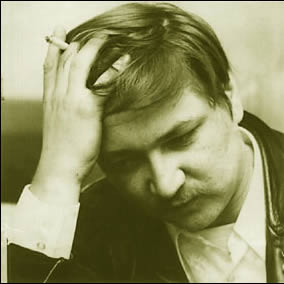 “I would like to build a house with my films.”

Rainer Werner Maria Fassbinder (May 31, 1945 – June 10, 1982) is one of the most important representatives of the New German Cinema. He was the first to announce, that grandpa’s cinema (“Opas Kino”) was dead. Rainer dreamed to merge the division of labor of the studio system with the author’s personal creativity. It was his utopian vision, which he made come true.

At the age of 15 Rainer attended night school, and earned a living on small jobs. During this time Fassbinder wrote short plays, poems and short stories. Later he took acting lessons and, from 1964-1966, attended the Fridl-Leonhard Studio for actors in Munich. To gain entry to the Berlin Film School, Fassbinder submitted a film version of his play Parallels. After that he made two short films in black and white – “The City Tramp” (“Der Stadtstreicher”, 1965) and “The Little Chaos” (“Das Kleine Chaos”, 1966).

IIn 1967, Fassbinder joined the Munich action-theater where he was an actor, director and script writer. The style of his stage directing is a mixture of choreographed movement and static poses. It made an impact on his early films.

The beginning of his career was connected with the theatre, which shaped the director’s style and
determined the visual concentration of his work. He was Pygmalion, who made any actor come alive, his personal obsession inspired people. The characters of his works were not “made” by the camera, lighting, color, scenery and editing. These elements just created the “aura” in which, thanks to their personal presence, they appeared on film.

One of Fassbinder’s favorite genres was melodrama.  His narrative domain was the dialectic of “false” and “true” feelings, their shifting and warping over time, the complexity and complicity of lovers and loved ones, speaks: victims and perpetrators, the permanence of violence in love.
Fassbinder’s phenomenal creative energy in violent contrast with a self-destructive libertinism earned him a reputation of the enfant terrible of the New German Cinema. But he was its central figure, in spite of his provocative style.

Film critics separate 3 periods of Fassbinder’s work. The remarkable features of the first period (1969-1971) are unnaturalistic dialogues and using of the static camera. The second period (the 1950s) is notable for the urgent subjects of prejudices about race, sex, sexual orientation, politics and class, of the everyday fascism of family life and friendship. The films of this period gained an international attention. During the third period (from 1977 until his death) Fassbinder became increasingly more idiosyncratic in terms of plot, form and subject matter in movies like “The Marriage of Maria Braun” (1978), “The Third Generation” (1979) and “Querelle” (1982).

Fassbinder died at the age of 37 from heart failure caused by a lethal interaction between sleeping pills and cocaine. His death is often considered to mark the end of the New German Cinema.