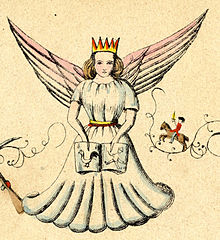 In some parts of Germany, mainly the south east of the country, children write to the Christkind/Christkindl asking for presents. The letters to the Christkind are decorated with sugar glued to the envelope to make them sparkly and attractive to look at. Children leave the letters on the windowsill at the beginning of or during Advent.

“Das Christkind” translates as “The Christ Child” in English but Germans don’t think of the Christkind as the baby Jesus. The Christkind is often described as a young girl with ‘Christ-like’ qualities.

It is the Christ child, or Christkind (Christkindl), who opens the annual Christmas markets in Nuremberg with “its”, or rather “her” prologue.

Here is an extract from the Christkind’s prologue:

…”In every year, four weeks before the time
When Christmas trees we decorate, and everyone awaits the feast,
Here on this square, just as of yore, this market does appear,
Which up and down the country they call Christmas Markt.
This little town is built from wood and canvas
Its splendor’s short, will soon be gone,
But yet it is eternal. My market is forever young,
As long as Nuremberg does exist, as long as you remember it”… 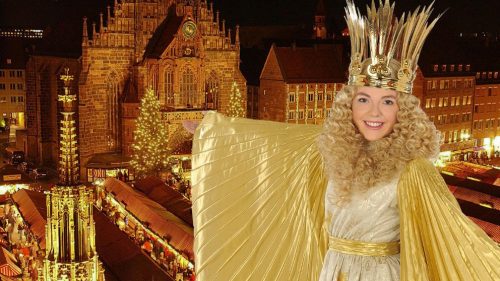 The people of Nuremberg vote for the Christchild every two years. Girls from Nuremberg who are between 16 and 19 years and are not smaller than 1m 60cm and who have absolutely no fear of heights can apply. The young ladies do not necessarily have to have been born in Nuremberg, but should have been living here for a long time. The applications are published in the daily Nuremberg papers and readers choose their favorites. The final choice is made by a jury, which comprises the heads of the press, tourist and market offices, the director of drama, the previous Christ child and media representatives. The candidates then have to read the Christ child’s prologue and recite a poem of their own choice to the jury. They also have to answer questions on Nuremberg, so not only knowledge is judged. Much like with Santa, children take pictures with the Christkind and tell her what gifts they would like for Christmas. This has been a tradition since 1969.

The Nürnberg Christkind officially opens the Christmas market on the Friday before Advent starts. And before Christmas she has over 150 ‘official duties’ including visiting hospitals, old people’s homes and children’s nurseries! She also has to give TV interviews and visit other cities.