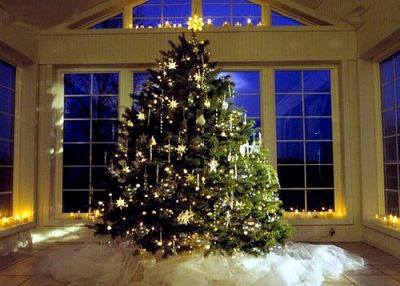 Modern Christmas trees originated during the Renaissance of early modern Germany. Its 16th-century origins are sometimes associated with Protestant Christian reformer Martin Luther, who is said to have first added lighted candles to an evergreen tree. If there are young children in the house, the trees are usually secretly decorated by the mother of the family. The Christmas tree was traditionally brought into the house on Christmas Eve. In some parts of Germany, during the evening, the family would read the Bible and sing Christmas songs such as O Tannenbaum, Ihr Kinderlein Kommet and Stille Nacht (Slient Night). 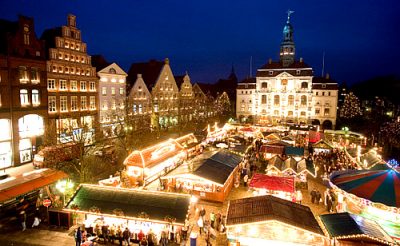 Germany is well-known for its Christmas Markets where all sorts of Christmas foods and decorations are sold. Perhaps the most famous German decorations are glass ornaments. The glass ornaments were originally hand-blown glass and were imported in the USA in 1880s by the Woolworth stores. The legend of the glass ‘Christmas Pickle’ is famous in the USA, but it’s that, a legend. Most people in Germany have never heard of the Christmas Pickle!

Christmas, or as the Germans call it – “Weihnachten” – is a busy time in Germany. Town streets and business offices are decorated with Christmas lights and branches of pine-needle and fir-needle trees. Everything appears in red and dark green – the colors of “Weihnachten” in Germany. Houses are usually scarcely decorated. You might see some lights in a window, or figures painted on windows with snow spray, but usually nothing too fancy. Christmas is the most cheerful and important season of the year. The main night is Christmas Eve which takes place on December 24th. Families get together for a rich holiday dinner and to wait for Santa (“Weihnachtsmann”) who brings the presents that night. Basically families exchange their gifts on the night of the 24th. Two more Christmas holidays follow, the 25th and the 2nd Christmas Day, the 26th of December. 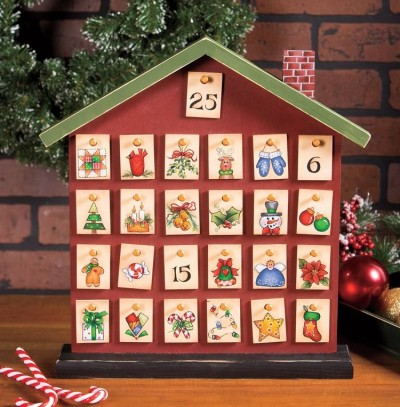 Christmas is one of the most powerful and certainly oldest traditions in human history. Holiday celebrations in Germany start in earnest with the beginning of Advent. On that day children get to open the first of the 24 doors of their Adventskalender. The most miraculous children’s holiday in German-speaking countries is St. Nicholas Day, celebrated on December 6. This is the day when all obedient children get presents, mostly sweets, from St. Nikolaus, whose custom is to put them into the shoes, providently set outside the bedroom door.

Germany (and most other countries) celebrates Christmas on December 24, the Holy Night. Shops are open much of the day and celebrations do not start before the afternoon. The children have to leave the room until the Christmas bell rings. At that point they will either find their presents under the tree, or Father Christmas himself will pay a visit. Dinner is served after presents have been unwrapped, and many families conclude the evening by attending a midnight Christmas Mass. The 25th and 26th are official holidays, mostly spent with family and friends.

At small work places and school parties, secret presents are often exchanged. A door is opened just wide enough for small presents to be thrown into the room. The presents are then passed around among the people until each person has the correct present! It is thought to be bad luck to find out who sent each present. 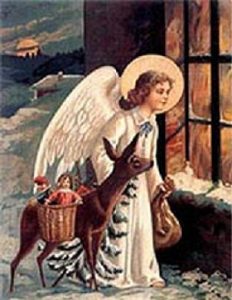 As well as hoping for presents from Christkind or der Weihnachtsmann, some children also hope that ‘der Nikolaus’ will bring you some small gifts, such as sweets and chocolate on the 6th December (St Nicholas’s Day). He comes in the night between the 5th and the 6th and puts the presents into the shoes of children, who usually place them by their doors. He might also knock on the door and the children will have to sing a song, play a song on an instrument or tell a story to St. Nicholas before he gives them their presents. 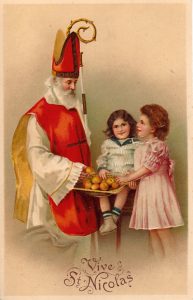 In some regions of Germany, there is a character called “Knecht Ruprecht” or “Krampus” who accompanies Nikolaus (St. Nicholas) on the 6th of December. He is big horned monster clothed in rags and carries chains. He is meant to punish the children who have been bad! He is usually the one who scares the little children. In other parts of Germany, St. Nicholas is followed by a small person called “Schwarzer Peter” (Black Peter) who carries a small whip. Black Peter also accompanies St. Nicholas or Sinterklaas in The Netherlands. In northwest Germany Santa is joined by Belsnickel, a man dressed all in fur. Although ‘der Nikolaus’ visits in December, he’s not officially part of Christmas.

Another tradition is the Sternsinger (or star singers) who go from house to house, sing a song and collect money for charity (this is a predominantly Catholic tradition). The singers are normally four children, three who dress up like the Wise men and one carries a star on a stick as a symbol for the Star of Bethlehem. When they’re finished singing, they write a signature with chalk over the door of the house. The sign is written in a special way, so 2018 would be: 20*C*M*B*18. It is considered to be bad luck to wash the sign away – it has to fade by itself. It has usually faded by the 6th of January (Epiphany). The Sternsingers visit houses between December 27th and January 6th. 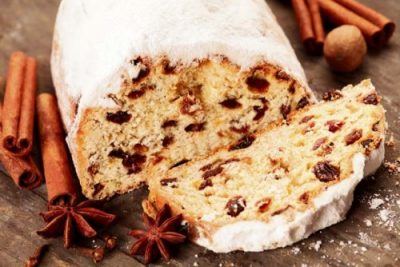 Carp or goose dishes are often served for the main Christmas meal. Stollen is a popular fruited yeast bread that is eaten at Christmas. Dresden has the most famous Christmas Stollen, but you can bake your own with little trouble and a few hours time. Christmas Stollen or Christstollen is full of nuts, raisins, and candied fruit. If made a few weeks in advance of serving it mellows and softens and is very good.