Halloween is when all demons and witches are out for the night hunting, and when there are pumpkins glaring out of the windows, and when it’s better to give a treat instead of being tricked…

Halloween is celebrated each year on October 31. It had its beginnings in an ancient, pre-Christian Celtic festival of the dead. The Celtic peoples, who were once found all over Europe, divided the year by four major holidays. According to their calendar, the year began on a day corresponding to November 1st on our present calendar. The date marked the beginning of winter. All Hallows’ Even, later shortened to Halloween, was observed on the evening of October 31st. 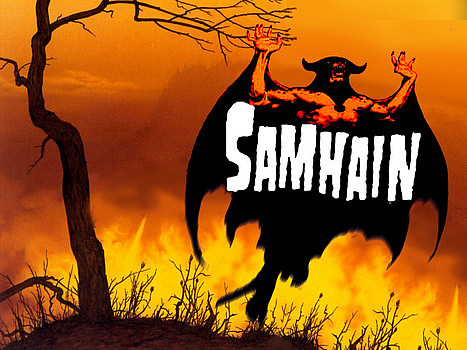 Halloween is for the Celtic peoples (Scotch, Irish, and part of the English) the eve of the festival of Samhain (pronounced Sah-ween), Lord of the dead. The Celtic year ended on October 31, the eve of Samhain, and was celebrated with both religious and agrarian rites. For the Druids, Samhain was both the “end of summer” and a festival of the dead. It was the period for threshing and food preparation for the winter season. People believed that on this day the spirits of the departed visited their kinsmen in search of warmth and cheering as winter approached.

It was the biggest and most significant holiday of the Celtic year. The Celts believed that at the time of Samhain, more so than any other time of the year, the ghosts of the dead were able to mingle with the living, because at Samhain the souls of those who had died during the year traveled into the otherworld. People gathered to sacrifice animals, fruits, and vegetables. They also lit bonfires in honor of the dead, to aid them on their journey, and to keep them away from the living. On that day all kinds of beings were present: ghosts, fairies, and demons – all of them part of the dark and dread.

The Christian Church tried to wipe out “pagan” holidays, such as Samhain, through its missionaries. The Druid festival of Samhain was meant to be replaced forever with Hallowmas, or All Saints’ Day, on November 1. This did not happen, but the status of the traditional Celtic deities diminished substantially. The Christian feast of All Saints was established to honor all saints, known and unknown. Thus, the festival of the pagan lord of the dead became the festival of the Christian dead, in memory of early Christians who died for their beliefs and to honor all those who died in the faith.

Anyway, All Saints Day, otherwise known as All Hallows (hallowed means sanctified or holy), continued the ancient Celtic traditions. The evening prior to the day was the time of the most intense activity, both human and supernatural. People continued to celebrate All Hallows Eve as a time of the wandering dead, but the supernatural beings were now thought to be evil. People continued to please those spirits by setting out gifts of food and drink. Subsequently, All Hallows Eve became Hallow Evening, which became Hallowe’en. 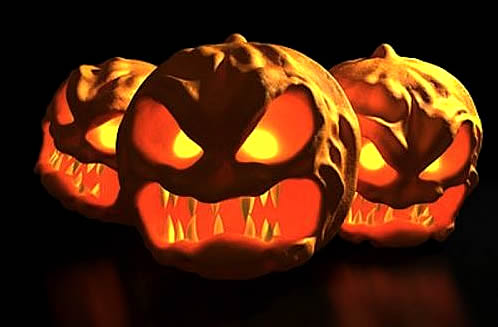 ☻ Current Halloween traditions date back to those early periods when people paraded through the streets in costumes and masks. Wandering groups of celebrants blocked doors of houses, carried away gates and plows, tapped on windows, threw vegetables at doors (corn candy). In some places boys and girls dressed in clothing of the opposite sex and, wearing masks, visited neighbors to play tricks.

☻  The “trick or treat” custom resembles an old Irish practice associated with Halloween. Groups of peasants went from house to house demanding food and other gifts in preparation for the evening’s festivities. The poor begged from door to door and were given pastries. Prosperity was assured for the liberal donors and threats were made against the stingy ones.

☻ The “Jack-o-lantern” tradition most probably came from the Irish folklore. There is a legend about a man called Jack, the drunkard and liar, who once used one of his tricks to make the devil himself climb up the tree. As the devil was up, Jack carved a cross on the tree trunk, and the devil was imprisoned in the crown of tree. Then Jack promised to let the devil go if the latter would never ever seduce him again. … When Jack died, the admission to the sky was refused to him since he had done only bad, but even the hell remained blocked because he was also a pest for the devil. The devil gave Jack only one little spark with which he had to move through the complete darkness, and that spark was in a scooped carrot, so that it could glow longer. So the Irish also used carrots for their first lanterns, but when they arrived in America, they found lots of pumpkins – much better material for the lanterns. Thus appeared “Jack-o-lanterns” made out of pumpkins with light inside.

☻  Witches occupy a special place in Germans’ spiritual pagan past. The most famous spot for witches was in the Harz mountain region in Germany. Until the 18th century, German maps even showed witches’ hovering over this spot, namely the Brocken peak. The Brocken peak is said to be populated with witches, who were once forest goddesses, later priestesses, then female doctors and marvelous women of the night who were first worshipped, then stared at with awe and admiration, and finally damned. For Germans Halloween blended with the night of witches, the Walpurgisnacht, which took place in the Harz mountains on the night before May 1.

Related Articles:
How did Halloween Come to Germany
All Pumpkins’ Night in Germany
Halloween: Trick or Treat?