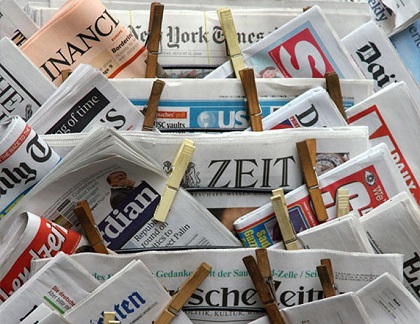 West Germany has always had highly developed mass media. The independence of the press and its freedom from censorship are guaranteed in Article 5 of the Basic Law. Conversely, the communist regime in East Germany tightly controlled the media. Despite government censorship, East Germans were voracious newspaper and magazine readers. More than three dozen newspapers enjoyed a combined circulation of almost 10 million in the GDR.

The complexion of the print media in eastern Germany changed markedly with unification. By mid-1991 only 100,000 copies of East Germany’s most widely circulated newspaper, Neues Deutschland, the newspaper of the communist party, were being printed daily, down from roughly 1 million in the recent past. Western consortia bought many of the other established urban newspapers and brought in new management. According to a public opinion survey during the 1990 national election, 68 percent of western Germans and 88 percent of eastern Germans read a newspaper on a regular basis. Not surprisingly, Germany boasts among the highest per capita newspaper circulations within Europe.

The press is privately owned, and most Germans rely on local or regional newspapers for their information. Five daily newspapers enjoy good reputations nationally because of their sophisticated domestic and international coverage: Frankfurter Allgemeine Zeitung (FAZ), Sueddeutsche Zeitung, Frankfurter Rundschau, Handelsblatt, and Die Welt. The FAZ is probably Germany’s most prestigious daily newspaper and is the one newspaper read by virtually all members of the political and business establishment. Although independent of any political party, its views are similar to those of the right-of-center CDU. Handelsblatt is the leading business daily. Die Zeit, a weekly newspaper, provides an erudite review of news and culture from a perspective sympathetic to Social Democratic views. Weekly editions of Die Zeit are often more than 100 pages, with in-depth articles filling an entire page. Former chancellor Schmidt is one of its publishers; the paper’s circulation is 493,000. Because these newspapers appeal to an elite readership, their circulation figures are much lower than that of the tabloid press. Bild Zeitung, with a daily circulation of close to 5 million, is Germany’s most widely circulated daily. It puts a sensationalist spin on topical issues and tends to support right-of-center policies.

Both Bild Zeitung and Die Welt are published by the Axel Springer Group, based in Hamburg. Axel Springer, now deceased, built an enormous media empire, which also includes the two largest Sunday newspapers, Bild am Sonntag and Welt am Sonntag, two Berlin daily newspapers, and many popular magazines. Springer publications are generally considered to have a strong conservative bent.

The liberal counterpart to Axel Springer and his successors has been Rudolf Augstein, founder and publisher of the weekly Der Spiegel, a highly respected and influential newsmagazine combining news coverage with investigative journalism. The magazine’s decidedly liberal critique of politics and politicians has often steeped it in controversy. In 1994 its circulation stood at over 1 million copies. Der Spiegel is distributed in 165 countries, and close to 15 percent of its sales are outside Germany.

In 1993 competition for market share held by Der Spiegel emerged with the publication of Focus , a newsmagazine fashioned after Time and Newsweek , with shorter articles and a more colorful layout than that offered by Der Spiegel. Focus appeared on newsstands in January 1993, was less expensive than Der Spiegel, and, after a few months, was faring better than expected. By mid-April Focus was maintaining a circulation of 600,000 and had exceeded its annual target for pages of advertising sold. Since its founding in 1946, Der Spiegel has successfully faced down competition from more than fifty publications. However, the circulation of Focus is growing while that of Der Spiegel is falling.

Although newspapers owned by political parties were common during the Weimar period, the partisan press is much less significant in the Germany of the 1990s. Vorwaerts is the official newspaper of the SPD, and Bayernkurier serves the CSU. Rheinischer Merkur has informal links to the CDU, and Neues Deutschland offers views of the PDS.