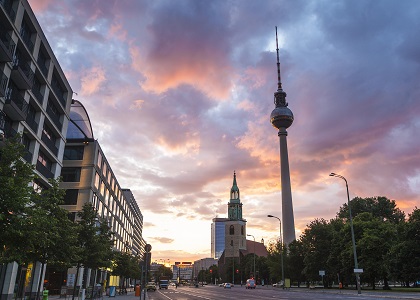 Radio and television are administered in a decentralized fashion as prescribed in the Basic Law. The intent behind the pattern of regional decentralization is to prevent the exploitation of the media by a strong national government, as had happened under the Nazi dictatorship. Germany has two public broadcasting corporations. The first, ARD, was established in 1954 and encompasses eleven regional public television and radio stations. ARD employs roughly 23,000 people and has an annual budget of about US$6 billion. The second, ZDF was founded in 1961 and is structured as a single corporation, not as a consortium. A third channel broadcasts cultural and educational programs for all Land corporations.

The Land broadcasting corporations have similar organizational structures. Each governs itself under the direction of a broadcasting council consisting–in most Laender–of representatives of the major social, economic, cultural, and political groups, including political parties, churches, unions, and business organizations. The broadcasting corporations are financed largely through monthly fees (DM23.80 per household as of late 1994) charged to television and radio owners. Public television is allowed to devote no more than thirty minutes per day to commercial advertisements. No advertisements are aired after 8:00 P.M. on weekdays or on Sundays. Advertising provides roughly one-third of television revenues and one-fourth of radio revenues. What distinguishes public television from commercial television is the ability to offer greater coverage of public service activities and cultural events.

Commercial broadcasters finance their operations solely with advertising revenues. Beyond the substantial capital costs associated with starting up a new television channel, private broadcasters have to rely on satellite and cable transmission because the airwaves do not offer unlimited capacity. Thus, viewers have to pay an additional fee to get access to private channels. In 1983 the federal post office undertook a large-scale program of wiring the country for cable television. In March 1993, of the 27 million households in western Germany that had televisions, 70 percent had access to cable service; of the 6.4 million households in eastern Germany, 12 percent had access to cable. However, at that point only about 60 percent of those eligible households had chosen to subscribe to cable.

In 1985 SAT-1 became Germany’s first private satellite television station. A group of publishing firms, including Springer, owns SAT-1; the channel offers a program of popular entertainment and news. Other stations subsequently sprang up, including 3-SAT, a joint production of German, Swiss, and Austrian national television; RTL, or Radio-Television-Luxembourg; and various European satellite stations. In early 1993, two all-news channels made their debut: Time Warner and CNN own one, n-tv; and German publishing giant Bertelsmann and the Sueddeutsche Zeitung are major financial backers of Vox, the second news channel. Vox failed quickly, however, closing its doors in April 1994. On the whole, private channels nonetheless are prospering. The percentage of Germans watching public channels has dropped to less than one-half since the start of private broadcasting in 1987.