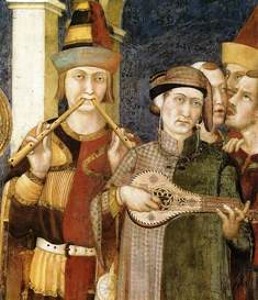 Like in many other European cultures German poetry and music were derived from medieval ages of single performers whose life has enriched the pool of national legends and myths: it is not doubt that everyone has heard about minstrels and minnesingers who inspired their audience with romantic world of never-ending love and devotion, patriotism and dignity.
German medieval singers were mostly poetizing love, therefore, their name ‘minnesingers’ was derived from the word ‘minne’ translated as ‘love’. Minnesingers were mainly knights of medieval Germany , however, they did not belong to the high nobility. The most popular topic of their lyrics was unequal love between a knight and a lady who belonged to the higher social grade. Of course, the knight’s love seemed very unhappy and made lyric songs more romantic and attractive.

Among famous minnesingers the most significant recognition was given to those who influenced further development of the German poetry and music. Such minnesingers developed lyric verses and rhymes up to appearance of sonnet prosody in 15 th -16 th centuries. One of such names belonged to Wolfram von Eschenbach who created the German original minne songs called Spruch. Eschenbach was classical German minstrel who roved throughout the country and poetized love and legendary brave knights and kings of Germany. Later his songs inspired many German musicians to create original German music famous all over the world. Such of these songs was a fable about Parsifal, the fable which gave the breath of the Wagner’s outstanding opera.

Nowadays minnesingers’ epoch can be traced by visitors of numerous German medieval castles which were places of minstrels’ contests. The knights who became minnesingers and then started roving around Germany as minstrels were amusing castles’ inhabitants. Usually these inhabitants belonged to upper levels of German society and German kings such as Ludwig II were inspired by minstrels to remain royal dignity and remember the times when German nation was free and proud of its origin.