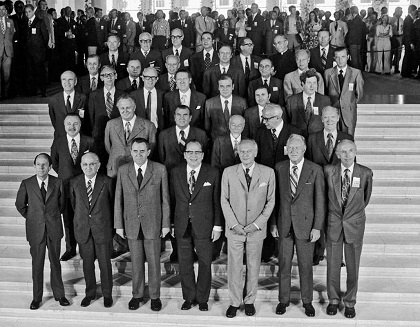 Keen to gain international recognition of its sphere of interest and believing that such recognition would solidify its grip on its East European satellite states, the Soviet Union, beginning in the early 1970s, sponsored an initiative calling for the convening of a Conference on Security and Cooperation in Europe (CSCE). For the West, such meetings meant the possibility of tying the Soviet Union and its satellites to an international security system, thereby lessening tensions, furthering economic cooperation, and obtaining humanitarian improvements for the people of Eastern Europe. The first of the series of conferences opened in July 1973 in Helsinki and was attended by the foreign ministers of the thirty-five member states. At the conference’s final meeting in 1975, the heads of state of all member countries were in attendance for the signing of the Final Act, or the Helsinki Accords.

As subsequent CSCE conferences showed, Soviet officials had totally underestimated the effect of the provisions for the exchange of information, which allowed for the unscrambled reception of Western media broadcasts within the geographic area of the Warsaw Pact countries. East Germans benefited especially from access to West German radio and television programs, which furnished previously unobtainable news about world events. Television viewers in the East also became aware of an obviously far superior standard of living in the West and developed a new awareness of the deficiencies of the communist regime, an awareness that fifteen years later led to the events that brought down that regime.

Related articles:
The Honecker Era, 1971-89
The New East German Constitution and the Question of Identity
Relations Between the Two Germanys
The Peace Movement and Internal Resistance in GDR
The Last Days of East Germany