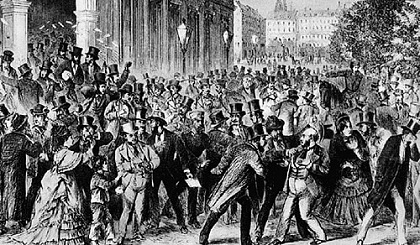 Germany experienced an economic boom immediately after unification. For the first time, the country was a single economic entity, and old impediments to internal trade were lifted. The federal chancellery published a new commercial code and established a uniform currency. The indemnity that France had to pay Germany after losing the 1870-71 war provided capital for railroad construction and building projects. A speculative boom resulted, characterized by large-scale formation of joint-stock companies and unscrupulous investment practices. This period of intense financial speculation and construction, called by Germans the Gruenderzeit (founders’ time), ended with the stock market crash of 1873.

Despite the crash and several subsequent periods of economic depression, Germany’s economy grew rapidly. By 1900 it rivaled the more-established British economy as the world’s largest. German coal production, about one-third of Britain’s in 1880, increased sixfold by 1913, almost equaling British yields that year. German steel production increased more than tenfold in the same period, surpassing British production by far. 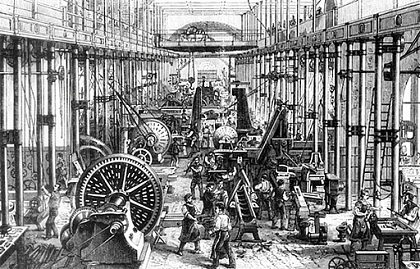 Industrialization began later in Germany than in Britain, and the German economy was not a significant part of the world economy until late in the nineteenth century. Germany’s industrialization started with the building of railroads in the 1840s and 1850s and the subsequent development of coal mining and iron and steel production, activities that made up what is called the First Industrial Revolution. In Germany, the Second Industrial Revolution, that is, the growth of chemical and electrical industries, followed the enormous expansion of coal and steel production so closely that the country can be said to have experienced the two revolutions almost simultaneously. Germany took an early lead in the chemical and electrical industries. Its chemists became renowned for their discoveries, and by 1914 the country was producing half the world’s electrical equipment. As a result of these developments, Germany became the continent’s industrial giant. 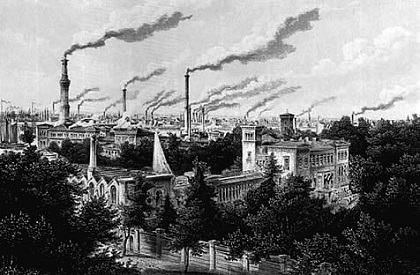 Germany’s population also expanded rapidly, growing from 41.0 million in 1871 to 49.7 million in 1891 and 65.3 million in 1911. The expanding and industrializing economy changed the way this rapidly expanding population earned its livelihood. In 1871 about 49 percent of the workforce was engaged in agriculture; by 1907 only 35 percent was. In the same period, industry’s share of the rapidly growing workforce rose from 31 percent to 40 percent. Urban birth rates were often the country’s highest, but there was much migration from rural areas to urban areas, where most industry was located. Berlin, by far the country’s largest city and a major industrial center, grew from almost 1 million inhabitants in 1875 to 2 million in 1910. Many smaller cities, especially those in areas with much industry–such as the Ruhr region, the upper Rhine Valley, the Neckar Valley, and Saxony–tripled or quadrupled in size during this period.