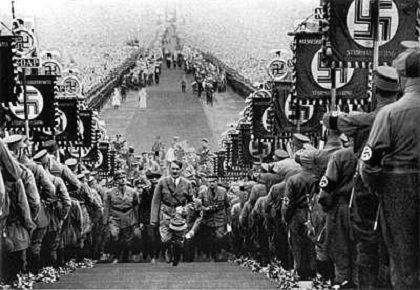 Once his regime was consolidated, Hitler took little interest in domestic policy, his sole concern being that Germany become sufficiently strong to realize his long-term geopolitical goal of creating a German empire that would dominate western Europe and extend deep into Russia. In a first step toward this goal, he made a de facto revision to the Treaty of Versailles by ceasing to heed its restrictions on German rearmament. Soon after becoming chancellor, Hitler ordered that rearmament, secretly under way since the early 1920s, be stepped up.

Later in 1933, he withdrew Germany from the League of Nations to reduce possible foreign control over Germany. In 1935 he announced that Germany had begun rearmament, would greatly increase the size of its army, and had established an air force. Italy, France, and Britain protested these actions but did nothing further, and Hitler soon signed an agreement with Britain permitting Germany to maintain a navy one-third the size of the British fleet. In 1936 Hitler remilitarized the Rhineland, in violation of various treaties. There was no foreign opposition.

In 1936 Germany began closer relations with fascist Italy, a pariah state because of its invasion of Ethiopia the year before. The two antidemocratic states joined together to assist General Francisco Franco in overthrowing Spain’s republican government during the Spanish Civil War (1936-39). In November 1936, Germany and Italy formed the Berlin-Rome Axis. That same year, Germany, Italy, and Japan signed the Anti-Comintern Pact, the three signatories pledging to defend each other against the Soviet Union and international communism. 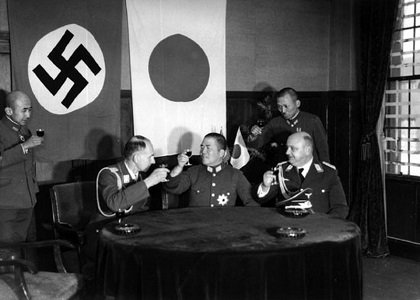 Nazi Germany, Italy, Spain and Japan sign an Anti-Communist International Pact on April 17,1939
It was also in 1936 that Hitler informed the regime’s top officials that Germany must be ready for war by 1940. In response, the Four-Year Plan was established. Developed under the direction of Hermann Goering, it set forth production quotas and market guidelines. Efforts to regiment the economy were not without conflict. Some of the economic elite desired that Germany be integrated into the world’s economy. Others advocated autarchy, that is, firmly basing the German economy in Central Europe and securing its raw materials through barter agreements. 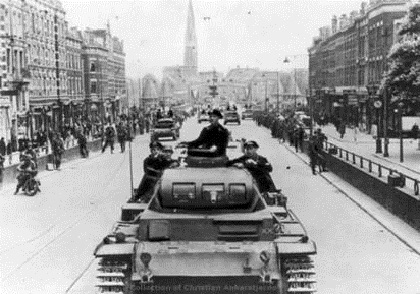 In the end, no clear decision on the management of the German economy was made. Large weapons contracts with industrial firms soon had the economy running at top speed, and full employment was reached by 1937. Wages did not increase much for ordinary workers, but job security after years of economic depression was much appreciated. The rearmament program was not placed on a sound financial footing, however. Taxes were not increased to pay for it because the regime feared that this would dissatisfy workers. Instead, the regime tapped the country’s foreign reserves, which were largely exhausted by 1939. The regime also shunned a rigorous organization of rearmament because it feared the social tensions this might engender. The production of consumer goods was not curtailed either, again based on the belief that the morale of the population had to remain high if Germany were to become strong. In addition, because Hitler expected that the wars waged in pursuit of his foreign policy goals would be short, he judged great supplies of weapons to be unnecessary. Thus, when war began in September 1939 with the invasion of Poland, Germany had a broad and impressive range of weapons, but not much in the way of replacements. As in World War I, the regime expected that the defeated would pay for Germany’s expansion. 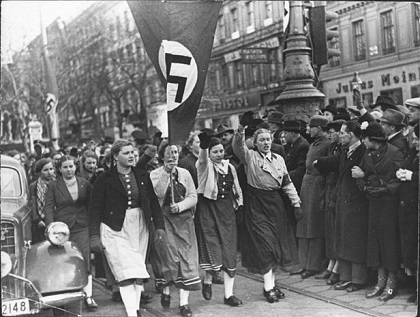 Through 1937 Hitler’s foreign policy had the approval of traditional conservatives. However, because many of them were skeptical about his long-range goals, Hitler replaced a number of high military officers and diplomats with more pliable subordinates. In March 1938, the German army was permitted to occupy Austria by that country’s browbeaten political leadership. The annexation (Anschluss) of Austria was welcomed by most Austrians, who wished to become part of a greater Germany, something forbidden by the Treaty of Versailles. In September 1938, British prime minister Neville Chamberlain consented to Hitler’s desire to take possession of the Sudetenland, an area in Czechoslovakia bordering Germany that was inhabited by about 3 million Germans. In March 1939, Germany occupied the Czech-populated western provinces of Bohemia and Moravia, and Slovakia was made a German puppet state.

Immediately after the German occupation of Bohemia and Moravia, Britain and France finally became convinced of Hitler’s expansionist objectives and announced their intention to defend the sovereignty of Poland. Because Hitler had concluded that he could not hope for British neutrality in the coming war, he formed a formal military alliance with Italy–the Pact of Steel. In August he signed a non-aggression pact with the Soviet Union, thus apparently freeing Germany from repeating the two-front war it had fought in World War I.