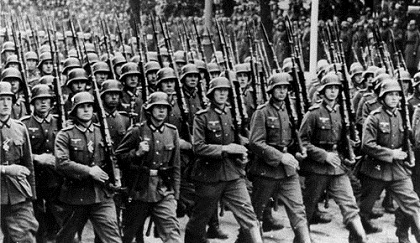 Once it became clear that the war would not be a short one, Germany’s industry was reorganized for a total mobilization. Between February 1942 and July 1944, armaments production increased threefold despite intense Allied bombing raids. Much of the labor for this increase came from the employment of some 7 million foreigners, taken from their homelands and forced to work under terrible conditions. Also contributing to the Nazi war effort was the systematic requisitioning of raw materials and food from occupied territories. As a result, Germans remained fairly well fed for most of the war, in contrast to the hunger endured during World War I.

Despite their comparative physical well-being until late in the war, it gradually became clear to many Germans that the regime’s series of military triumphs had come to an end. Even the most intense, mendacious propaganda could not conceal that Germany’s forces were being beaten back. Sharing this growing awareness that defeat was likely, a group of military officers decided to assassinate Hitler. Although elements of the military had long opposed him, no one had acted to this point. During 1943 and 1944, the conspirators, who included many high-ranking officers and numerous prominent civilians, worked out elaborate plans for seizing power after the dictator’s death. 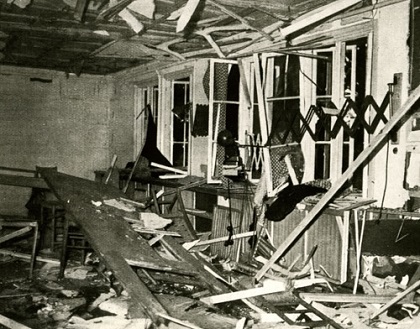 On July 20, 1944, the conspirators ignited a bomb that would probably have killed Hitler except for a stroke of bad luck–the misplacement of the device under a conference room table. The regime struck back and after months of reprisals had killed several thousand people, among them one field marshal and twenty-two generals. Several earlier attempts on Hitler’s life had also failed. Because of these failures, it would be up to the Allies to remove Hitler and his regime from power.

Anti-Semitism was one of the Third Reich’s most faithfully executed policies. Hitler saw the Jews’ existence as inimical to the well-being of the German race. In his youth in Vienna, he had come to believe in a social Darwinist, life-or-death struggle of the races, with that between the German race and the Jews being the most savage. Because of his adherence to these racist notions, he dreamed of creating a German empire completely free of Jews, believing that if the Jewish “bacillus” were permitted to remain within the Teutonic empire, the empire would become corrupted and fail. 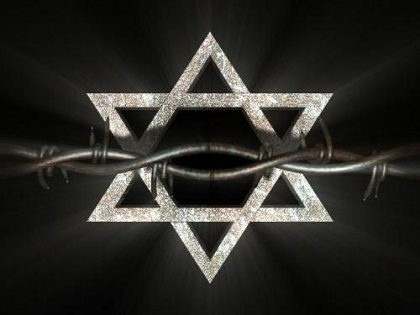 Upon taking power, the Nazis began immediately to rid Germany of its Jewish citizens. In the Aryan Paragraph of 1933, the regime decreed that Jews could not hold civil service positions. The Nuremberg Laws of 1935 deprived Jews of the right to citizenship and restricted relationships between “Aryans” (racially pure Germans) and Jews. After the Kristallnacht (Crystal Night) of November 9, 1938, an organized act of violence perpetrated by Nazis against Jews in all parts of Germany, the persecution of Jews entered a new phase. Random acts of violence, by then commonplace, were replaced by the systematic isolation of the Jewish population in Germany, which had numbered about 600,000 in the early 1930s.

Until 1941 there had been plans to “cleanse” Germany of Jews by gathering them together and expelling them from the Reich. One plan had as its goal the transfer of Germany’s Jews to Madagascar. A contingent of Jews had even been moved to southern France in preparation. However, wartime conditions and the presence of millions of Jews in Poland, the Soviet Union, and other occupied areas in Eastern Europe gradually led to the adoption of another plan: the systematic extermination of all Jews who came under German control. Techniques that had been developed for the regime’s euthanasia program came to be used against Jews. Discussions in January 1942 at the Wannsee Conference on the outskirts of Berlin led to the improved organization and coordination of the program of genocide.

Killing came to be done in an efficient, factorylike fashion in large extermination camps run by Himmler’s Special Duty Section (Sonderdienst–SD). The tempo of the mass murder of Jewish men, women, and children was accelerated toward the end of the war. Hitler’s preoccupation with the “final solution” was so great that the transport of Jews was at times given preference over the transport of war matériel. Authorities generally agree that about 6 million European Jews died in the Holocaust. A large number (about 4.5 million) of those killed came from Poland and the Soviet Union; about 125,000 German Jews were murdered.