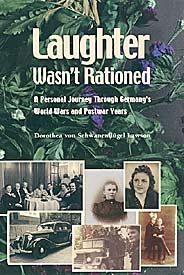 Life in Germany before and after the Versailles Treaty, and Hitler’s rise to power
By Dorothea von Schwanenfluegel Lawson

It is a pleasure to share a few thoughts with the Internet world. You must understand, all this technology is new to me, & frankly at my age, I’m not sure I can keep up with it! You see, I may be a few years older than you, having been born in Germany in 1916 — in the middle of World War I.

I immigrated to the U.S. in 1962 & at the urging of friends, have spent over 10 years putting my life’s experiences on paper. What I thought were very ordinary occurrences, apparently are eye-opening revelations for many Americans. I keep hearing, “history books didn’t tell us this!” Luckily I survived both World Wars & have a strong constitution. Today it’s dancing that keeps me young.

From 1916 – 1920 I grew up in Upper Silesia. Did you know that we had a shortage of housing, rising poverty & hunger? Food was rationed & we were starving. My aunts had to go on weekly food hoarding trips at night, sneaking into Austria where they knew of a worthwhile source of food.

The Versailles Treaty was always a thorn in our eye. The immediate effect it had on my family was that we had to move because Upper Silesia was supposed to become part of Poland. So we moved to Muenster, Westphalia. Everything was scarce & we didn’t have a lot of things that we take for granted today. Everything continued to be rationed, even gas. I remember that in the morning when I got out of bed, my grandmother would quickly slip the dish with bread dough under my warm feather bed to make it rise faster. We had only coal-fired stoves, no central heating, and besides, coal was rationed, too. My mother & I hiked out into the country to a farmer on a weekly basis to get food.

By 1929 the Nazis made their appearance on our political scene. Germany had been governed by emergency decrees for the past 10 years & the parliament was constantly being dissolved as one chancellor followed another. These chaotic conditions offered great advantages to Hitler, although the Nazis were merely tolerated along with the Communists & THIRTY-FOUR other political parties. The growing millions of unemployed people were receptive to the Nazi slogans that Hitler was a man of the common people who would be their savior in this time of despair.

In 1933 Hitler was appointed the Chancellor of Germany, even though he was a leader of a minority party. People were flocking to join the Nazi Party since the Party effectively controlled who worked and where. Well now, this affected me personally. It didn’t take long before the new youth leader of Germany, Baldur von Schirach, wanted to greet Germany’s youth in visits to selected cities. All school children had to line up along the street where he was supposed to drive through in his car. It was the teacher’s responsibility to assure that everyone showed up at the designated spot & time. We waited 1 hour, then a second hour. We were not allowed to leave so we sat on the curb, but this was not acceptable to the Nazi Party controllers, so we were made to stand again — & then sat down as soon as they were out of sight! Finally, after more than 3 hours, the youth leader whizzed by in 3 seconds, like a ghost. Our statistical role was over. The next day our pictures appeared in all the newspapers with a caption in bold print proclaiming how joyously Muenster’s youth had greeted its leader & what a show of enthusiasm there had been.

You can read more about my experiences in my memoir Laughter Wasn’t Rationed.


Related articles:
“Aryanization” of Germany in 1933 and mass book burning
Bombings and air-raids during WWII