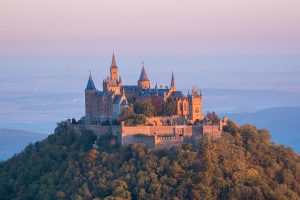 Swabian counts and princes, the kings of Prussia and even the German emperors have their roots here at Hohenzollern Castle in the heart of Baden-Württemberg between Lake Constance, the Black Forest and Stuttgart. The proud fortress offers majestic panoramic views stretching over more than 100 km which already prompted Emperor William II to proclaim: “The views from Hohenzollern Castle are truly worth the journey”.

Hohenzollern Castle is the ancestral seat of the imperial House of Hohenzollern. A popular tourist destination, Hohenzollern castle has over 300,000 visitors per year, making it one of the most visited castles in Germany. The castle sits atop a 855 m high Berg Hohenzollern, on the western side of the Swabian Alps. 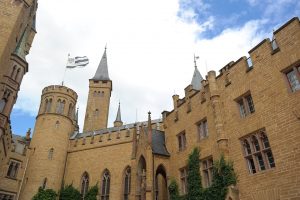 The first fortress on the mountain was constructed in the early 11th century. Over the years the House of Hohenzollern split several times, but the castle remained in the Swabian branch, the dynastic seniors of the Franconian-Brandenburgian cadet branch that later acquired its own imperial throne. This castle was completely destroyed in 1423 after a ten-month siege by the free imperial cities of Swabia. A larger and sturdier structure was constructed from 1454 to 1461, which served as a refuge for the Catholic Swabian Hohenzollerns, including during the Thirty Years’ War. By the end of the 18th century it was thought to have lost its strategic importance and gradually fell into disrepair, leading to the demolition of several dilapidated buildings. Today, only the medieval chapel remains. 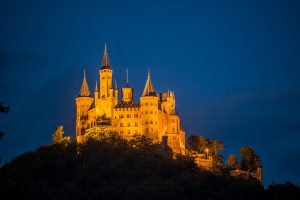 The final castle was built between 1846 and 1867 as a family memorial by Hohenzollern scion King Frederick William IV of Prussia. Architect Friedrich August Stüler based his design on English Gothic Revival architecture and the Châteaux of the Loire Valley. No member of the Hohenzollern family was in permanent or regular residence when it was completed, and none the three German Kaisers of the late 19th and early 20th century German Empire ever occupied the castle. In 1945 it briefly became the home of the former Crown Prince Wilhelm of Germany, son of the last Hohenzollern monarch, Kaiser Wilhelm II. 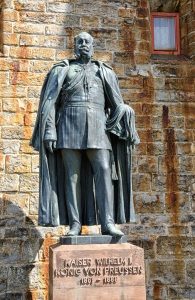 A bronze statue of Kaiser Wilhelm I at Hohenzollern Castle

Since 1952, the castle has been filled with art and historical artifacts from the collections of the Hohenzollern family and the former Hohenzollern Museum in Schloss Monbijou. Among the historical artifacts of Prussian history contained in the castle are the Crown of Wilhelm II, some of the personal effects of King Frederick the Great, and a letter from US President George Washington thanking Hohenzollern descendant Baron von Steuben for his service in the American Revolutionary War. From 1952 until 1991 the caskets of Frederick Wilhelm I and Frederick the Great were in the chapel, but were moved back to Potsdam following German reunification in 1991.

Glamorous as well as dark events shape the 1,000 year history of this impressive building: In the 15th century, the first Hohenzollern Castle was destroyed by war, but was rebuilt soon afterwards. In the 18th century, the fortress was deserted and fell into ruin. King Frederick William IV of Prussia had his family’s ancestral home reconstructed in its present form in the 19th century, even larger and more magnificent than before. Today, the castle is still privately owned by the Prussian line and the Swabian Royal House of the Hohenzollern. And whenever the current owner, Prince George Frederick of Prussia, and his family are staying in the castle, the family standard flies high on the flag tower.

The castle is still privately owned, with two-thirds belonging to the Brandenburg-Prussian family line.