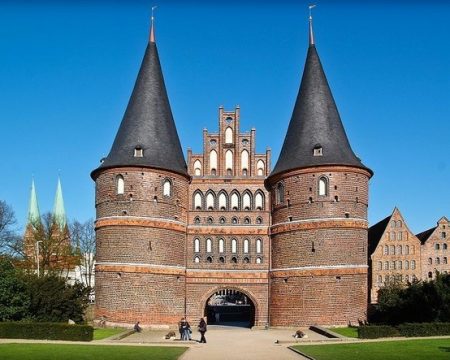 Holstentor, the symbol of Lübeck, a red-brick city gate that defended the river-bounded Altstadt (old town).

Lübeck is a northern German city distinguished by Brick Gothic architecture that dates back to its time as the medieval capital of the Hanseatic League, a powerful trading confederation.

Lübeck is the largest Baltic harbour of Germany, and the port is a major employer in the city. Paper and wood products, fruit, grain, automobiles, salt, and fertilizer are among the cargoes handled, and there is a significant amount of ferry traffic. Other industries include shipbuilding, metalworking, and food processing; services related to finance, communications, and the tourist trade have become increasingly important. The city is also renowned for its confectionery delights. Since the 19th century, it has professed to be the “capital of marzipan,” thanks largely to the efforts of Johann Georg Niederegger, who developed a process to speed production of the almond-based concoction.

The Lübeck wine trade dates back to Hanseatic times. One Lübeck specialty is Rotspon, wine made from grapes processed and fermented in France and transported in wooden barrels to Lübeck, where it is stored, aged and bottled.

An earlier settlement in the area was named Liubice. Located at the confluence of the Schwartau and Trave rivers, 4 miles (6 km) downstream from the present city center, it was the seat of a Slavic principality and had a castle and harbor. The German city was founded by Count Adolf II of Holstein in 1143. This settlement was destroyed by fire in 1157, but a new city was built there by Henry III, duke of Saxony, in 1159. It developed rapidly as the main trading point between the raw-material-producing countries of northern and eastern Europe and the manufacturing centers in the west.

For a short time (1201–26) Lübeck belonged to Denmark, but in 1226 it was made a free imperial city by Frederick II. During this time Lübeck developed a form of self-government with its own laws and constitution. The “laws of Lübeck” were later granted to more than 100 cities in the Baltic area, and the example of Lübeck greatly influenced the economy and appearance of those cities. In 1358 the Hanseatic League made Lübeck its administrative headquarters. This event took place a mere eight years after the city’s population had been devastated by the Black Death. Subsequent decades brought increasing wealth to the city, but there were also periods of civil unrest (1380–84 and 1408–16) in which the artisans’ and craftsmen’s guilds actively opposed the city council, which was controlled by the merchants. The opening of the Stecknitz Canal in 1398 greatly facilitated the shipping of salt from Lüneburg. By the early 15th century, Lübeck was the second largest city (after Cologne) in northern Germany, with some 22,000 inhabitants.

From 1866 Lübeck belonged to the North German Confederation and from 1871 to the German Empire. The city’s economy was restored with the construction of the Elbe-Lübeck Canal in 1900. Its status as a separate, self-governing entity, dating from 1226, ended in 1937 when the Nazi regime made it part of the Prussian province of Schleswig-Holstein. In World War II a large part of the historic inner city was destroyed by a British bombing raid (March 28, 1942), but the area was restored during postwar reconstruction. At the end of the war, the city’s population swelled tremendously with the arrival of 100,000 German refugees who had fled the Soviet advance in the east.

The Marienkirche (13th–14th century) towering above the rooftops of Lübeck, Germany.
© Roman Sigaev/Shutterstock.com

The inner city of Lübeck was designated a UNESCO World Heritage site in 1987. It retains a distinctive medieval character in its narrow cobblestone streets and its faithfully restored houses and shops, along with its ecclesiastical and municipal structures.

Among Lübeck’s outstanding monuments are the Marienkirche (St. Mary’s Church, a 13th–14th-century brick structure in the Gothic style), the Romanesque cathedral (begun in 1173 under Henry III), and the magnificent Rathaus (city hall), built in a combination of Gothic and Renaissance styles. Waterways and parklands outline the inner city, where the moat and ramparts once shielded it from attack. Two towered gates are remnants of the medieval fortifications: the Burgtor (1444), which received a new roof in 1685, and the famous Holstentor (1478), which has housed the municipal museum since 1950. Upon the archway of the Holstentor is the benediction “Concordia domi foris pax” (“Concord at home, peace outside”).