Caspar David Friedrich, (born on September 5, 1774, Greifswald, Pomerania [now in Germany] – died on May 7, 1840, Dresden, Saxony), was a 19th-century German Romantic landscape painter, generally considered the most important German artist of his generation. His vast, mysterious, atmospheric landscapes and seascapes proclaimed human helplessness against the forces of nature and did much to establish the idea of the Sublime as a central concern of Romanticism.

Friedrich’s paintings characteristically set a human presence in diminished perspective amid expansive landscapes, reducing the figures to a scale that, according to the art historian Christopher John Murray, directs “the viewer’s gaze towards their metaphysical dimension”.

Friedrich studied from 1794 to 1798 at the Copenhagen Academy, one of the most progressive art schools of the day. Though he was taught by many painters, the school did not offer a course in painting. He settled at Dresden and became a member of an artistic and literary circle that included the painter Philipp Otto Runge and the writers Ludwig Tieck and Novalis. 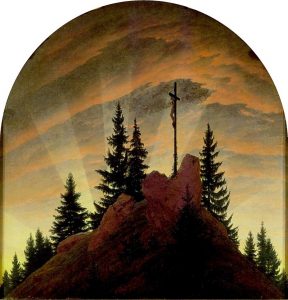 The Tetschen Altar, or The Cross in the Mountains (1807)

His drawings in sepia, executed in his neat early style, won the poet J.W. von Goethe’s approval and half of the prize from the Weimar Art Society in 1805. His first important oil painting, The Cross in the Mountains (c. 1807; also called the Tetschen Altarpiece), established his mature style, characterized by an overwhelming sense of stillness and isolation, and was an attempt to replace the traditional symbology of religious painting with one drawn from nature.

Other symbolic landscapes, such as The Sea of Ice (1822; also called The Wreck of the Hope; now lost), which makes reference to Sir William Parry’s polar expedition, reveal his fatalism and his attitude toward Nature. Though they were based on close observation of the landscape, his works were colored by his imaginative response to the atmosphere of the Baltic coast and the Harz Mountains, which he found both awesome and ominous.

On 21 January 1818, Friedrich married Caroline Bommer, the twenty-five-year-old daughter of a dyer from Dresden. The couple had three children, with their first, Emma, arriving in 1820. Physiologist and painter Carl Gustav Carus notes in his biographical essays that marriage did not impact significantly on either Friedrich’s life or personality, yet his canvasses from this period, including Chalk Cliffs on Rügen—painted after his honeymoon—display a new sense of levity, while his palette is brighter and less austere. Human figures appear with increasing frequency in the paintings of this period, which Siegel interprets as a reflection that “the importance of human life, particularly his family, now occupies his thoughts more and more, and his friends, his wife, and his townspeople appear as frequent subjects in his art.”

Around this time, he found support from two sources in Russia. In 1820, the Grand Duke Nikolai Pavlovich, at the behest of his wife Alexandra Feodorovna, visited Friedrich’s studio and returned to Saint Petersburg with a number of his paintings, and exchange that began a patronage that continued for many years.

With dawn and dusk constituting prominent themes of his landscapes, Friedrich’s own later years were characterized by a growing pessimism. His work becomes darker, revealing a fearsome monumentality. The Wreck of the Hope (also known as The Polar Sea or The Sea of Ice (1823–24)) perhaps best summarizes Friedrich’s ideas and aims at this point, though in such a radical way that the painting was not well received. Completed in 1824, it depicted a grim subject, a shipwreck in the Arctic Ocean; “the image he produced, with its grinding slabs of travertine-colored floe ice chewing up a wooden ship, goes beyond documentary into allegory: the frail bark of human aspiration crushed by the world’s immense and glacial indifference.”

In 1835 he suffered a stroke from which he never recovered, and a second stroke in 1837 caused him almost complete paralysis. His reputation was in decline by the time of his death as the Romantic movement gave way to Realism. For a long time his work was forgotten. It was not until the late 1970s that Friedrich regained his reputation as an icon of the German Romantic movement and a painter of international importance.