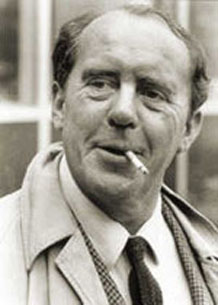 Heinrich Theodor Böll was born on December 21, 1917 in Cologne.  His father was a sculptor and cabinet-maker. Böll’s Catholic, pacifist family opposed the rise of Nazism.  Between 1924 and 1928, the future writer attended elementary school in Köln Raderthal, and from 1928 to 1937, the state-run Kaiser-Wilhelm classical secondary school in Cologne. He successfully resisted joining the Hitler Youth during the 1930s. He was apprenticed to a bookseller for the Math Lempertz Company in Bonn; then studied German at the University of Cologne.
Böll started his first attempts to write in 1938 and gave private lessons.

Late in the summer of 1939 he was conscripted into the German Army shortly before the outbreak of the war. Conscripted into the Wehrmacht, he served in France, Romania, Hungary and the Soviet Union, and was wounded four times before he was captured by Americans in April 1945 and sent to a prisoner-of-war camp; later interned until October 1945 in a camp in France, and then for a few weeks in October-November 1945, in an English camp in Belgium. 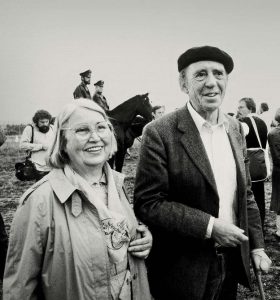 In December 1945, Böll returned to Cologne with his wife, where they live in a destroyed house. He started to write again. From 1946 to 1949, the writer published short stories, and in 1949 his first book “Der Zug war pünktlich” (“The Train Was on Time”) was published. Many other novels, short stories, radio plays and essay collections followed, and in 1972 he received the Nobel Prize for Literature. He was the first German-born author to receive this award. His book has been translated into more than 30 languages. His best-known works are “Billiards at Half-past Nine”, “The Clown”, “Group Portrait with Lady”, “The Lost Honor of Katharina Blum”, and “The Safety Net”.

Between 1950 and 1951 Heinrich worked as a temporary employee in the Cologne Bureau of Statistics. Böll was deeply rooted in his hometown of Cologne. However, the architecture of the newly-rebuilt Cologne left him indifferent. During all his life he maintained numerous relations with the Cologne citizens, rich and poor. In the post-war period, he was preoccupied with memories of the War and the effect it had on the lives of ordinary people, who became the heroes in his writing. His villains were the authority figures in government, business, and in the Church, whom he criticized. His simple style made him a favorite for German-language textbooks. When he was in hospital, the nurses often complained about the people who came to see their friend Heinrich Böll. The writer was a leader of the German writers who tried to come to grips with the memory of the war, the Nazis, and the Holocaust.

He was a president of the then West German P.E.N. and subsequently the International P.E.N. organizations. He travelled frequently as a representative of the new, democratic Germany. Böll was popular in Eastern Europe, as he seemed to portray the dark side of capitalism in his books. He sold millions of copies in the Soviet Union alone.

Heinrich Böll died in 1985 at the age of 67. He is considered to be one of Germany’s foremost post-World War II writers. The writer was awarded the Georg Büchner Prize in 1967 and the Nobel Prize for Literature in 1972. A special Heinrich Böll Archive was set up in the Cologne Library to hold his personal papers, bought from his family, but large amounts of the material were damaged, possibly irreparably, when the building collapsed in March 2009.