I do not want to die . . . until I have faithfully made the most of my talent and cultivated the seed that was placed in me until the last small twig has grown.
— Kaethe Kollwitz 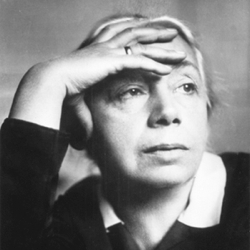 Kollwitz was gifted with an extraordinary talent for drawing. Though she chose to become a painter, she actually was a draftsman, a sculptor, and primarily — a printmaker. Etching was the first graphic medium she attempted, soon to be replaced by lithography. By drawing directly on the stone she was able to create an image with the clear, expressive quality that characterized her drawing style.

The daughter of a mason, Käthe Schmidt was born on July 8, 1867 in Königsberg, East Prussia (now Kaliningrad, Russia). It was her father who encouraged her to draw, and when she was fourteen, she began art lessons with the engraver Rudolf Mauer. At seventeen she moved to Berlin where she enrolled in the Berlin School for Women Artists, and later went to study in Munich.

After her marriage to Dr. Karl Kollwitz in 1891, the couple settled in Berlin living in one of the poorest sections of the city — in working class section. It was there that Kollwitz got exposed to a wide range of suffering and tragedy which is so powerfully reflected in her works. Her art features dark, oppressive subjects. Images of death, war and injustice dominate her work. Most of her best works are tragic. The simplified purity of lithography suited her involvement in social issues. The bold shapes and distinct blacks and whites enhanced her social statements. In her finest prints she draws attention to the ongoing problems of inflation, unemployment, illness, starvation, political imprisonment and death.

Kollwitz won many acknowledgements in her own time. Her style and choice of subjects appealed to a large audience. With Hitler’s rise to power she was unofficially prevented from exhibiting, but ironically the Nazi used some of her famous images for their own propaganda purposes. One of the greatest graphic artists of all time, Kollwitz spent her life in an autocratic state which, whether ruled by the Kaiser or the Nazis, hated everything for which she stood. Kaethe Kollwitz became the first woman elected to the Prussian Academy but because of her beliefs, and her art, she was expelled from the academy in 1933. Harassed by the Nazi regime, Kollwitz’s home was bombed in 1943. Her art was classified as “degenerate.” Despite these events, Kollwitz remained in Berlin.

Her personal life was full of hardships and heartache. She lost her son in World War I and her grandson — in World War II and these losses contributed to her political sympathies.

Kaethe Kollwitz died on April 22, 1945, five years after her husband’s death. She didn’t know that Nazi regime was defeated.