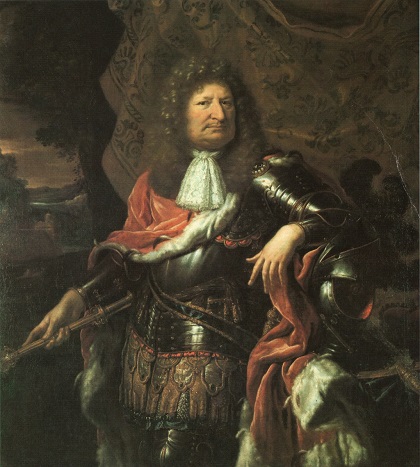 On January 18, 1701 Friedrich III, Elector of Brandenburg (11.07.1657 – 25.02.1713), crowned himself as King in Prussia. Today, exactly 300 years after this outstanding event, the government heads of Berlin and Brandenburg, Mr. Diepgen and Mr. Stolpe, officially opened the celebrations on the occasion in the Berlin theater on Gendarmenmarkt. During 2001, more than 100 museums and cultural institutions will hold a series of exhibitions on the topic of Prussia and its history. Exhibitions will be accompanied by festivals in castles and villages.

Now, back to history…

43-year-old Elector Friedrich III couldn’t wait to become the King. On December 17, 1700 he started a gigantic action — with 300 carts and vehicles, accompanied by 200 persons, all carried by 30000 horses — and set off to Koenigsberg, the place of his coronation. By January 18, 1701 everything was ready — trumpeters, drummers, bells. The King-to-be created a scenario for his own coronation. The people of Koenigsberg saluted Friedrich and his wife Sophie Charlotte as their King and Queen. Friedrich put the crown onto his own head and after that let the bishops whom he had appointed specially for this occasion bless him and his reigning. Only with the bishops’ blessing the kingship was considered to be given by God. Thus Friedrich III became Friedrich I King in Prussia. He dared not call himself King of Prussia because some parts of Prussia were still dominated by Poland.

The coronation took place in the morning, and Friedrich appeared in the hall of the Koenigsberg palace as a real king. He wore a scarlet dress with diamond buttons and a purple silk mantle adorned with golden crowns and eagles. All this was fastened with a magnificent three-diamond buckle. After the self-coronation, he called for his wife in order to crown her a Queen. She came in a gorgeous golden dress all shining with diamonds, with a wonderful pearl bouquet fastened onto the dress, and wearing the purple mantle with crowns and eagles similar to her husband’s. She kneed before the King, and he put the crown onto her head. Sophie Charlotte, being a very aristocratic and highly intellectual woman, perceived the whole event as a farce, and it was painful and awkward for her to take part in it.

Not seeing, or not willing to see the Queen’s sufferings, the King continued his performance. The servants brought the first and best piece of roasted ox and two rummers of wine for the royal couple. The feast began. Golden and silver coins to the sum of 6000 thalers were scattered among the crowd. The first day of the celebration finished with the beautiful fireworks and illumination. The whole celebration continued till spring and finished in Berlin. Afterwards it occurred that the event cost the King a pretty penny, that is a pretty thaler. The full cost was six million thalers! Considering the fact that the King’s yearly income was four million only, it was nothing but spendthrifting.

Europe recognized the new kingdom. One by one Polish King August II, German Kaiser, rulers of Denmark, England, Russia, the Netherlands, Switzerland, and others greeted the new King. French, Swiss and Spanish rulers later joined the others in recognizing and welcoming King Friedrich I in Prussia. Brandenburg became the central province of the Prussian kingdom, all institutions and the army were referred to as royal.