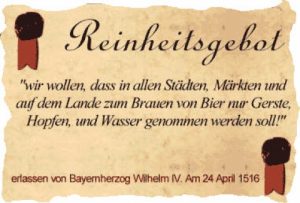 The Reinheitsgebot, literally “purity order”, sometimes called the “German Beer Purity Law” in English, is a series of regulations limiting the ingredients in beer in Germany and the states of the former Holy Roman Empire. The best-known version of the law was adopted in Bavaria in 1516, but similar regulations predate the Bavarian order, and modern regulations also significantly differ from the 1516 Bavarian version.

The most influential predecessor of the modern Reinheitsgebot was a law first adopted in the duchy of Munich in 1487. After Bavaria was reunited, the Munich law was adopted across the entirety of Bavaria on 23 April 1516. As Germany unified, Bavaria pushed for adoption of this law on a national basis.

Nowadays, according to tradition, during Oktoberfest only original Munich beer which is characterized by a long tradition, much experience in brewing and and the strict adherence of the Reinheitsgebot.

– It says what can be part of beer, and what can not. Beer may only contain water, barley, and hops.
– It gives a price to beer. This is important for taxation.

Some people talk about the Bavarian Reinheitsgebot, or the German Reinheitsgebot. They all mean the same thing. There are similar acts in the other states which later became known as Germany. 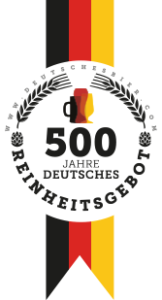 The Reinheitsgebot is no longer part of German law. It has been replaced by the Provisional German Beer Law , which allows things prohibited in the Reinheitsgebot, such as wheat malt and cane sugar, but which no longer allows unmalted barley.

Hops were added as a method of preservation (to stop the beer from going bad quickly). Hops were allowed to stop other things (like adding certain mushrooms to the beer, which was done in the Middle Ages) being done to preserve beer. Other herbs, like stinging nettles had been used. The stinging nettle is part of the same plant family as hops.

A brewer who broke the Reinheitsgebot was punished: the beer barrels were taken by the state and destroyed and he/she did not receive any money for the loss.

Even today, many brewers are proud of the Reinheitsgebot; most German breweries say they follow it. Some only use it as a marketing tool. The Reinheitsgebot says that beer is made of barley, so all wheat beers were not allowed by the original Reinheitsgebot).

The text (translated) of the 1516 Bavarian law is as follows:

We hereby proclaim and decree, by Authority of our Province, that henceforth in the Duchy of Bavaria, in the country as well as in the cities and marketplaces, the following rules apply to the sale of beer:

From Michaelmas to Georgi, the price for one Mass [Bavarian Liter 1,069] or one Kopf [bowl-shaped container for fluids, not quite one Mass], is not to exceed one Pfennig Munich value, and

From Georgi to Michaelmas, the Mass shall not be sold for more than two Pfennig of the same value, the Kopf not more than three Heller [Heller usually one-half Pfennig].

If this not be adhered to, the punishment stated below shall be administered.

Should any person brew, or otherwise have, other beer than March beer, it is not to be sold any higher than one Pfennig per Mass.

Furthermore, we wish to emphasize that in future in all cities, market-towns and in the country, the only ingredients used for the brewing of beer must be Barley, Hops and Water. Whosoever knowingly disregards or transgresses upon this ordinance, shall be punished by the Court authorities’ confiscating such barrels of beer, without fail.

Should, however, an innkeeper in the country, city or market-towns buy two or three pails of beer (containing 60 Mass) and sell it again to the common peasantry, he alone shall be permitted to charge one Heller more for the Mass or the Kopf, than mentioned above. Furthermore, should there arise a scarcity and subsequent price increase of the barley (also considering that the times of harvest differ, due to location), WE, the Bavarian Duchy, shall have the right to order curtailments for the good of all concerned.
— Bavarian Reinheitsgebot of 1516 (emphasis added), Eden, Karl J. (1993). “History of German Brewing”. Zymurgy. 16 (4).

The Bavarian order of 1516 was introduced in part to prevent price competition with bakers for wheat and rye. The restriction of grains to barley was meant to ensure the availability of affordable bread, as wheat and rye were reserved for use by bakers. The rule may have also had a protectionist role, as beers from Northern Germany often contained additives that were not present in Bavarian beer.

Religious conservatism may have also played a role in adoption of the rule in Bavaria, to suppress the use of plants that were allegedly used in pagan rituals, such as gruit. The rule also excluded problematic methods of preserving beer, such as soot, stinging nettle and henbane. 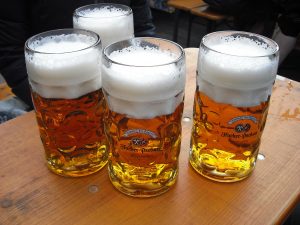 Because of strong German consumer preferences, labeling beer as being compliant with Reinheitsgebot is believed to be a valuable marketing tool in Germany. German brewers have used the law to market German beer internationally, including a failed attempt to have the law added to the UNESCO list of intangible cultural heritages. Some breweries outside Germany, such as Gordon Biersch in California, Red Oak Brewery in Whitsett, North Carolina, Olde Mecklenburg Brewery in Charlotte, North Carolina, Schulz Braü in Knoxville, Tennessee, Namibia Breweries, Penn Brewery in Pittsburgh, Pennsylvania, and Bitte Schön Brauhaus in New Hamburg, Ontario also claim to be compliant to the Reinheitsgebot as part of their marketing.