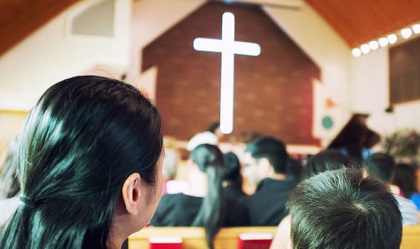 Religious associations represent a third major group of organized interests in the German policy process. The experience of the Third Reich had a profound influence on the postwar development of Protestant and Roman Catholic churches in the Federal Republic. Both espoused the view that moral responsibility extends to political responsibility and that passivity toward the political process is inappropriate. Both also desired greater ecumenism in German society. The establishment of the CDU perhaps best illustrates this last point. The CDU sought to include both Roman Catholics and Protestants in a catchall party that was committed to Christian values. The two churches maintain distinct identities, but the major cleavage in German society is no longer between religious denominations, but between religious and secular interests.

In postwar West Germany, many people felt that organized religion was an important element in the country’s newly forming political ethos. Unlike the United States, West Germany acknowledged no separation of church and state. The state formally recognized the political role of the churches, establishing a special legal status for them as public law corporations. Under a German system developed in the nineteenth century, unless church members formally leave the denomination into which they were baptized, they must pay an annual church surtax equal to 8 or 9 percent of their income tax. The federal government collects this surcharge and remits the proceeds to the churches to finance their activities. In 1992 the figure totaled about US$10 billion for Protestant and Catholic churches combined. Churches are included on government commissions and supervisory bodies that influence social and family policy, education, and related topics.

Not surprisingly, the relationship between church and state in East Germany was markedly different. The communist regime wanted control over all aspects of society, and the existence of autonomous churches was unacceptable. In the 1950s, the regime sought to limit the role of the churches to the religious sphere, keeping them out of politics or education. The state proved unable to suppress the churches fully, however, and by the 1970s the SED had resigned itself to accommodating them.

Roman Catholics constituted only 7 percent of the population in the east; thus, it was the Protestant church, with broad backing among East Germans, that played an important social and political role. The Protestant church retained some autonomy from the state, and by the late 1980s the church had become gathering places for dissidents. In 1989 weekly peace services at churches in big cities, such as East Berlin and Leipzig, became hotbeds of opposition to the regime and led to the mass demonstrations that ultimately brought down the communist regime.

The Evangelical Church in Germany (Evangelische Kirche in Deutschland–EKD), the peak association for the seventeen autonomous provincial churches in West Germany, was established in 1948. The structural unity of the German Protestant church officially ended in 1969, when the eight provincial churches in East Germany withdrew from the EKD and formed the Federation of the Evangelical Churches (Bund der Evangelischen Kirchen–BEK). German unity ushered in the reunification of these two federations in 1991, under the auspices of the EKD. As the formal political representative of German Protestant churches, the EKD represents its member congregations in all formal agreements with the government on church-state affairs. On religious and social matters, however, the EKD serves only as a coordinating agent for its largely independent member churches.

The principal organizational forum for the German Roman Catholic Church is the Bishops’ Conference, at which all German bishops convene semiannually. Since unification, the eastern bishops also have attended these meetings. As elsewhere in the Catholic world, all decisions on theological matters and general policy emanate from the Vatican; the annual Bishops’ Conference addresses current pastoral and religious issues within Germany.

In West Germany, the Roman Catholic Church was traditionally much more active politically on a day-to-day basis than the Protestant denominations. The Bishops’ Conference maintains a permanent secretariat in Bonn to monitor activity in parliament and in the federal ministries. Catholic leaders regularly lobby the government on pending legislation relating to social or moral issues. The EKD participates less actively in the political process, but it is more inclined than its Catholic counterpart to speak out on controversial political issues that have spiritual implications. Examples include the Protestant church’s strong stance against the remilitarization of West Germany in the 1950s and its continued activism in the areas of peace and nuclear nonproliferation.