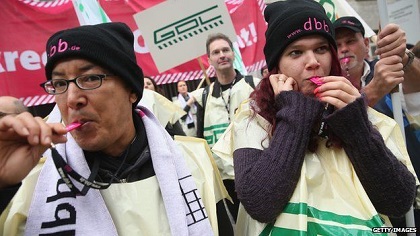 During the Weimar Republic, labor unions were divided along partisan lines, a situation that led to competition among the socialist, communist, Catholic, and liberal trade associations. After World War II, labor leaders wanted to break with the past and form a trade union federation independent of political parties. The result was the establishment of the Federation of German Trade Unions (Deutscher Gewerkschaftsbund–DGB) in 1949.

Four principles guided the founders of the DGB. First, the labor movement wanted representation through an organization that was unitary and autonomous, with no ties to particular religions or political parties. Second, labor leaders decided to organize the unions along industrial lines so that all workers at one firm would belong to the same union irrespective of their individual occupations. For instance, an electrician at an automobile plant would join the metalworkers’ union. This organizing principle provides unions with greater bargaining power when negotiating with employer associations, because one union represents the entire workforce of an industry. Third, a decentralized system of interest representation was created. Individual unions typically emulate the federal structure, with local, district, Land, and national offices. Each level has some input into the shape of union policy. Fourth, the unions chose to rely on legislation for the protection of workers’ rights, rather than on direct negotiations with business representatives. Thus, when the unions enter into contract negotiations with employers, they can focus on improving workers’ economic welfare.

The DGB is the national peak association of the German labor movement and encompasses sixteen unions, from metalworkers to leather workers. The DGB represents virtually all organized industrial workers, most white-collar employees, and many government workers. As of mid-1995, out of a total workforce of 35 million, 9.8 million workers were members of these labor unions. Although the DGB does not represent even half of the German workforce, its unions negotiate the collective bargaining agreements covering over 90 percent of all jobs. Thus, the work of the labor unions affects nearly all workers. The DGB lost over 2 million members between the end of 1991 and the end of 1994. The vast majority of these members (1.7 million) were from eastern Germany, which has been in the throes of radical economic restructuring and has suffered high unemployment. Some DGB officials express the hope that, once the economy in the eastern part of the country stabilizes, DGB membership will grow.

DGB members can be divided into “activist” and “accommodationist” factions. The activists, led by the Metalworkers’ Union and the Industriegewerkschaft Medien, the union for workers in the media, aggressively challenge business interests and are major advocates of social reform. For example, the Metalworkers’ Union led the drive for codetermination (Mitbestimmung) in the early 1950s, for substantial wage gains in the 1960s, and for the thirty-five-hour workweek in the 1980s. The activist unions are more likely to strike if collective bargaining fails to achieve desired results. In contrast, the accommodationist unions, including those representing chemical workers, construction workers, textile workers, and food-processing workers, prefer to cooperate with employers to achieve stable, sustainable economic growth. The individual unions have responded differently to German unification as well. Activist unions have been assertive in pushing for wage equalization between east and west, an effort that culminated in a massive strike in the metalworking industry in eastern Germany in May 1993.

Two other, significantly smaller peak interest associations represent labor sectors independent of the DGB. The German White-Collar Employees’ Union (Deutsche Angestellten-Gewerkschaft–DAG) is composed solely of salaried employees, principally high-level technocrats and managers in private enterprise. The Federation of German Civil Servants (Deutscher Beamten Bund–DBB) has competed successfully with the DGB to represent civil servants. The DBB is better described as a lobbying organization, because civil servants can neither strike nor engage in collective bargaining.