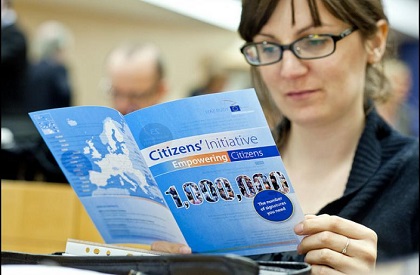 In the early 1970s, a new form of political participation in the form of citizens’ initiative associations sprang up throughout West Germany. These associations, in essence nontraditional interest groups, were loosely and often temporarily organized groups of citizens mobilized in response to one particular local issue. Concerns ranged from school reform, urban redevelopment, and traffic to environmental protection. The staying power of these associations reflected a dissatisfaction with established political institutions. Unlike traditional interest groups, these associations aimed to improve the quality of life, rather than the material well-being, of their supporters. Although their ultimate goal is to produce a new social model, these groups tend to be more skilled at critiquing the existing order than at constructing a new one. Activists in these organizations tend overwhelmingly to be young and highly educated, espousing a New Left ideology. Citizens’ initiative associations employ diverse tactics, ranging from lobbying and circulating petitions to organizing mass demonstrations and protest marches. Three major political movements have grown out of these associations: the environmental lobby, the women’s movement, and the peace lobby.

With public consciousness of the environment growing substantially in the 1970s and 1980s, a new set of nationwide organizations was formed, including the Federal Association of Citizens’ Initiatives on Environmental Protection (Bundesverband Bürgerinitiativen Umweltschutz–BBU), Greenpeace, and Robin Wood. The BBU was at its strongest in the late 1970s, when it coordinated more than 1,000 local citizens’ initiative associations and when almost 1 million people were affiliated with the environmental movement. By the late 1980s, the BBU was associated with several hundred local groups whose cumulative membership reached only 150,000. Environmental activists have focused on a range of issues, including nuclear power, acid rain, and Waldsterben (death of the forest).

The women’s movement, organized in the late 1960s and early 1970s, sought to fight discrimination against women in the workplace and at home. Guarantees of gender equality in the Basic Law had done little to alter the traditional male bias within society. The women’s movement in western Germany developed a two-pronged approach to securing equality for women: programs for raising the consciousness of women, and programs aimed at legislative reform. The first approach focused on the personal development of women and has met with success at the local level, with most larger cities offering a women’s center, women’s bookstores, self-help groups, and a network of other women’s organizations. The attempt at the national level to mobilize the movement’s supporters and bring about legislative change remains underdeveloped.

The peace movement blossomed in the early 1980s in response to the controversy over the stationing of intermediate-range nuclear weapons in West Germany. Mass demonstrations called for the government to pursue arms control negotiations to eliminate these weapons altogether. Instead, the Bundestag voted for deployment in October 1983, and, with its major objective lost, the peace movement lost momentum. The end of the Cold War brought a reduction in East-West tensions and the conclusion of substantial arms control agreements. These developments have further deprived the peace movement of focus. The peace movement was able to mobilize activity against the Persian Gulf War in early 1991, however.

Autonomous citizens’ initiative associations were unacceptable in East Germany. The communist government established official organizations–the Society for Nature and the Environment, the Peace Council, and the Democratic Women’s Federation of Germany–to co-opt the issues. The peaceful revolution of 1989 that brought down the communist regime in East Germany showed both the willingness among eastern Germans to demonstrate and protest in large numbers, as well as the power of such citizen action. Nonetheless, the levels of protest and direct action are lower in the east than in the west. However, as easterners become more accustomed to the freedoms afforded in a democracy, it is thought that they might become more inclined to exercise them.