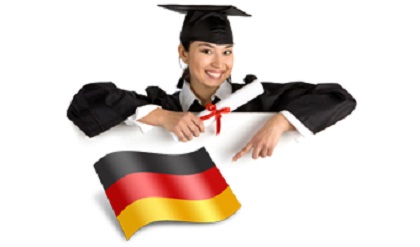 With hundreds of respected universities to choose from as well as its location in the heart of Europe, it’s no wonder that Germany consistently ranks as one of the most popular countries in the world in which to study. There’s Berlin, steeped in history while maintaining a laid-back, trendy feel, and then there is Munich, with its industrial heart and conservative approach to life – which also plays host to the world-famous Oktoberfest beer festival.

Germany’s position as a European powerhouse means that many of its universities offer great job prospects – in fact, a lot of foreign students love the country so much that they choose to continue living in Germany after their studies. What’s more, Germany can be a relatively inexpensive country to study in, as a lot of undergraduate courses do not command any tuition fees for both domestic and international students.

In 2014, Germany’s 16 states abolished tuition fees for undergraduate students at all public German universities. This means that currently both domestic and international undergraduates at public universities in Germany can study for free, with just a small fee to cover administration and other costs per semester.

This good fortune may not last however though. In autumn 2017 the south-west state of Baden-Württemberg reintroduced tuition fees for non-EU students, and it’s possible other states will follow suit in the coming years. Non-EU students in Baden-Württemberg must now pay tuition fees of €3,000 (~US$3,500) per year, while those gaining a second degree pay a reduced fee of €1,300 (~US$1,600) per year.

For now, the low fees certainly help to make studying in Germany an attractive option for prospective students, and the country has previously been ranked as the fourth most popular destination for international students in the world (after the US, UK and Australia).

As per the 2013 summer semester, Germany had a total of 415 state-maintained and state-recognized institutions of higher education, which are of the following types:

Besides these three main types, which may be either state institutions or private institutions recognized by the state, some special categories exist, like church-maintained colleges, universities of cooperative education (Berufsakademien), colleges of education or colleges of public administration. In their operations, including the organization of studies and the designation and award of degrees, all types are subject to higher education legislation. 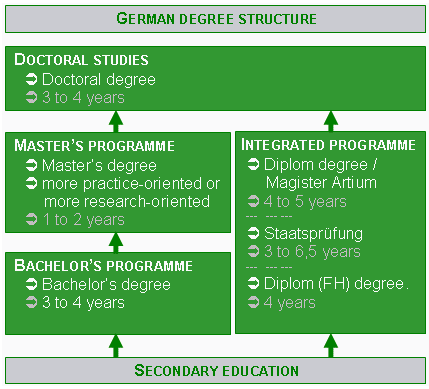 German higher education used to be offered in integrated “long” (one-tier) programs leading to Diplom- or Magister Artium degrees or completed by a Staatsprüfung (State Examination).

German higher education is currently adapting to the three cycle degree system of the European Higher Education Area. Therefore, the old one-tier programs are successively being replaced by a the new system. Bachelor and Master’s programs are now offered at most institutions instead of the integrated “long” programs, except for most study programs in law and medicine. The Bachelor and Master’s programs are designed to provide an enlarged variety and flexibility to students in planning and pursuing educational objectives and they also intend to enhance international compatibility of studies and thus international mobility. Increasingly, higher education institutions offer study programs taught in English to attract a larger number of incoming students. Doctorate or PhD programs are for the most part not yet subject to state regulations, but there exists a clear trend towards more integrated programs.

German university students can complete their first degree in about five years, but on average university studies last seven years. Advanced degrees require further study. Because tuition at institutions of higher education amounts to no more than a nominal fee except at the handful of private universities, study at the university level means only meeting living expenses. An extensive federal and Land program provides interest-free loans to students coming from lower-income households. Half of the loan must be paid within five years of graduation. Students graduating in the top third of their class or within a shorter time than usual have portions of their loans forgiven. Loans are also available to students receiving technical and vocational training. 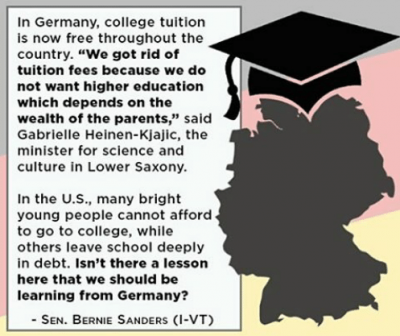 Unlike the United States, Germany does not have a group of elite universities; none enjoys a reputation for greater overall excellence than is enjoyed by the others. Instead, particular departments of some universities are commonly seen as very good in their field. For example, the University of Cologne has a noted economics faculty. Also in contrast to the United States, German universities do not offer much in the way of campus life, and collegiate athletics are nearly nonexistent. Universities generally consist of small clusters of buildings dispersed throughout the city in which they are located. Students do not live on university property, although some are housed in student dormitories operated by churches or other nonprofit organizations.