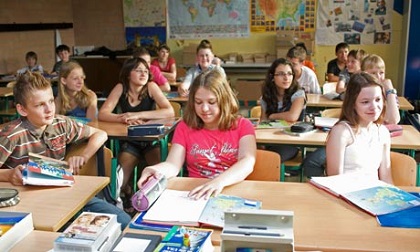 Junior secondary education starts with two years (grades five and six) of orientation courses during which students explore a variety of educational career paths open to them. The courses are designed to provide more time for the student and parents to decide upon appropriate subsequent education.

The Hauptschule, often called a short-course secondary school in English, lasts five or six years and consists of grades five to nine or five to ten depending on the Land. Some Laender require a compulsory tenth year or offer a two-year orientation program. About one-third of students completing primary school continue in the Hauptschule. The curriculum stresses preparation for a vocation as well as mathematics, history, geography, German, and one foreign language. After receiving their diploma, graduates either become apprentices in shops or factories while taking compulsory part-time courses or attend some form of full-time vocational school until the age of eighteen.

Another one-third of primary school graduates attend the Realschule, sometimes called the intermediate school. These schools include grades five through ten. Students seeking access to middle levels of government, industry, and business attend the Realschule. The curriculum is the same as that of the Hauptschule, but students take an additional foreign language, shorthand, wordprocessing, and bookkeeping, and they learn some computer skills. Graduation from the Realschule enables students to enter a Fachoberschule (a higher technical school) or a Fachgymnasium (a specialized high school or grammar school) for the next stage of secondary education. A special program makes it possible for a few students to transfer into the Gymnasium, but this is exceptional.

The Gymnasium, sometimes called high school or grammar school in English, begins upon completion of the Grundschule or the orientation grades and includes grades five through thirteen. The number of students attending the Gymnasium has increased dramatically in recent decades; by the mid-1990s, about one-third of all primary school graduates completed a course of study at the Gymnasium, which gives them the right to study at the university level. In the 1990s, the Gymnasium continued to be the primary educational route into the universities, although other routes have been created.

The Gesamtschule originated in the late 1960s to provide a broader range of educational opportunities for students than the traditional Gymnasium. The Gesamtschule has an all-inclusive curriculum for students ages ten to eighteen and a good deal of freedom to choose coursework. Some schools of this type have been established as all-day schools, unlike the Gymnasium, which is a part-day school with extensive homework assignments. The popularity of the Gesamtschule has been mixed. It has been resisted in more conservative areas, especially in Bavaria, where only one such school had been established by the beginning of the 1990s. A few more were established in Bavaria in the next few years; their presence is marginal when compared with the Gymnasium, of which there were 395 in 1994. Even North Rhine-Westphalia, Germany’s most populous Land and an outspoken supporter of the Gesamtschule, had only 181, compared with 623 of the traditional Gymasium.

The variety of educational programs, tracks, and opportunities available to students increases at the senior secondary level. The largest single student group attends the senior level of the Gymnasium, the Gymnasiale Oberstufe. This level includes the traditional academically oriented Gymnasium, the vocational Gymnasium, the occupation-specific Fachgymnasium, and the Gesamtschule.

Graduation from these schools requires passing the Abitur, the qualifying examination for studying at the university level. Until the late 1970s, nearly everyone who passed the Abitur had access to an institution of higher education. However, in the 1980s the numerus clausus, a restrictive quota system that had been introduced for the study of medicine in the late 1960s, began to be used for other popular fields of study. Strict selection criteria limiting access to higher education had become necessary because the demand for places at universities had become much greater than the supply.