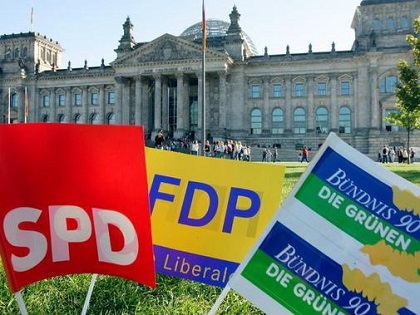 The SPD-FDP coalition formed in 1969 became increasingly strained in the early 1980s, leading to concerns among the FDP leadership about its stability. The SPD had become deeply divided because many of its members found Chancellor Schmidt’s policies too conservative. Particularly troublesome was his position on NATO’s Dual-Track Decision, which required the stationing of new missiles in West Germany if Soviet missiles were not withdrawn. FDP chairman Genscher feared that Schmidt would lose the backing of the SPD as its left wing became more influential. As a result of these fears, Genscher began to urge a change in the political constellation governing West Germany and the formation of a coalition with the CDU/CSU.

The SPD-FDP coalition broke apart in September 1982 when the FDP minister of economics, Otto Lambsdorff, advocated cutting social welfare expenditures. Schmidt countered by threatening to fire Lambsdorff. The threat prompted the resignation of all FDP cabinet members. Schmidt presided over a minority government for a few days until the FDP, together with the CDU/CSU, raised a constructive vote of no-confidence against the government. Schmidt lost the vote, and Helmut Kohl, head of the CDU, formed a new coalition government composed of the CDU, its sister party the CSU, and the FDP. Kohl himself became chancellor on October 1, 1982.

Born in 1930 in Ludwigshafen in the heavily Roman Catholic and conservative Rhineland-Palatinate, Kohl was a founding member and leader of the CDU youth organization in his hometown. He served as minister president of the Rhineland-Palatinate from 1969 to 1976, and in the 1976 national elections he ran unsuccessfully against SPD candidate Chancellor Schmidt for the office of chancellor.

In the 1980 national elections, Franz Josef Strauss was the CDU/CSU candidate for chancellor. Strauss, Bavaria’s minister president and head of the CSU, was one of Germany’s most influential and colorful politicians. He believed the CDU/CSU could come to power in Bonn without the help of the FDP. After Strauss lost the elections and Schmidt remained chancellor, however, Kohl began to steer toward an eventual coalition with the FDP because he did not think that conservatives could win an absolute majority at the national level.

New elections for the Bundestag were held in 1983, several months after Kohl had assumed the chancellorship. The results gave Kohl’s government a clear majority and confirmed him as chancellor. Throughout his career, Kohl demonstrated a strong determination, extraordinary political skills, and a keen sense for the political will of the German people. His key role in the German reunification process has deservedly earned him a position of distinction in German history.

In the first half of the 1980s, West German politics were dominated by the heated discussion of NATO’s Dual-Track Decision. The peace movement mounted numerous demonstrations to protest the possible stationing of United States missiles in West Germany should the Soviet Union not remove its newly stationed SS-20 missiles from Eastern Europe.

In the mid-1970s, the Soviet Union had decided to modernize its intermediate-range missile arsenal by the introduction and stationing of the advanced ground-based SS-20 systems. With a range of approximately 5,000 kilometers, the SS-20 was capable of delivering a 150-kiloton nuclear warhead within a target radius of 400 meters–a capability that could not be matched by any NATO weapon. It was clear that the missile’s target area was Central Europe. Chancellor Schmidt had been among the first to warn of the danger posed by this new Soviet weapon system. The United States reacted quickly by developing two new weapon systems–the Pershing II inter-mediate-range rocket and the cruise missile. Although the Pershing II possessed a considerably shorter range and a much smaller warhead than the SS-20, it was capable of hitting its potential target with almost absolute accuracy.

At the NATO conference of foreign and defense ministers held in December 1979, officials decided to deploy 108 Pershing II rockets and 464 cruise missiles in Europe by the end of 1983. They also agreed to enter negotiations as soon as possible with the Soviet Union on the stationing of medium-range missiles in Europe. If Soviet missiles were withdrawn from Central Europe, United States missiles would not be positioned in West Germany. The United States-Soviet Union talks began in Geneva in November 1981 and continued for two years, but without achieving results.

NATO’s Dual-Track Decision met with mounting opposition from the West German and European peace movement, and numerous rallies were held in the early 1980s. In the fall of 1983, protest demonstrations throughout the FRG were aimed at influencing the imminent decision of the Bundestag on deployment. Demonstrators feared that if missiles were stationed on German soil, the German population would be wiped out in the event of a possible nuclear exchange, while the Soviet Union would remain unaffected. With time, however, the peace movement became increasingly divided, and after 1983 it began to have less influence on public opinion. Most West Germans saw the Soviet Union as responsible for the escalation of the arms race by their deployment of the SS-20 and, in addition, mistrusted the Soviet Union’s apparently keen interest in the peace movement in Western Europe.

Chancellor Kohl and his new government were determined to stand by West Germany’s commitment to its NATO partners. After a lengthy debate in the Bundestag, the CDU/CSU-FDP majority coalition voted for deployment, with the SPD and the Greens opposing. Stationing of the missiles began immediately, and the Soviet Union withdrew from the Geneva negotiations. By the mid-1980s, as international tensions began to ease, public attention turned to new prospects for détente between West and East.