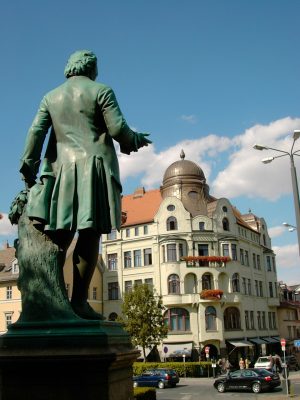 Weimar is a city in the federal state of Thuringia, Germany. The city was a focal point of the German Enlightenment and home of the leading characters of the literary genre of Weimar Classicism, the writers Johann Wolfgang von Goethe and Friedrich Schiller. In the 19th century, famous composers like Franz Liszt made a music center of Weimar and later, artists and architects like Henry van de Velde, Wassily Kandinsky, Paul Klee, Lyonel Feininger and Walter Gropius came to the city and founded the Bauhaus movement, the most important German design school of the interwar period. However, the political history of 20th-century Weimar was inconsistent: it was the place where Germany’s first democratic constitution was signed after the First World War, giving its name to the Weimar Republic period in German politics (1918–1933), as well as one of the cities mythologized by the National Socialist propaganda.

Germany, and Berlin in particular, was fertile ground for intellectuals, artists, and innovators from many fields during the Weimar Republic years. The social environment was chaotic, and politics were passionate. German university faculties became universally open to Jewish scholars in 1918. 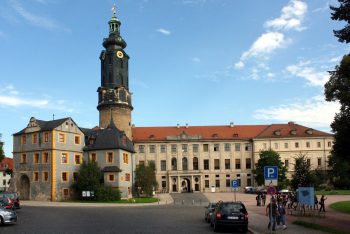 With the rise of Nazism and the ascent to power of Adolf Hitler in 1933, many German intellectuals and cultural figures, both Jewish and non-Jewish, fled Germany for the United States, the United Kingdom, and other parts of the world. The strife-ridden Weimar Republic was eventually toppled, in 1933, by the National Socialists. Nazi policies led to war and the partition of Germany. Weimar ended up east of the border that remained tightly guarded until 1989.

After German Reunification in 1990, Weimar experienced significant economic hardship, but funding restored much that had deteriorated, and it was designated as a UNESCO World Heritage site in 1996 (Bauhaus) and 1998 (Classical Weimar). The European Council of Ministers selected the city as European Capital of Culture for 1999. Tourism has become an important economic factor over the decades. Weimar is now a popular residence of people working in Erfurt and Jena, both less than 20 minutes away. 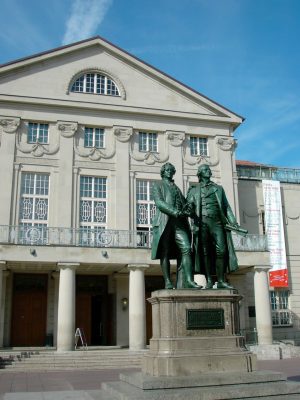 A statue depicting the polymaths Johann Wolfgang von Goethe and Friedrich Schiller stands on Theaterplatz, the square in front of the theatre, traditionally regarded as the heart of the city. The two men are among the many distinguished names who served at the court of Saxe-Weimar-Eisenach during its Golden Age under Duchess Anna Amalia and her son Grand Duke Karl August. Numerous figures of renown were drawn to Weimar, which became one of the leading centers of the Enlightenment. This prompted locals to joke darkly that though their city has few famous sons and daughters plenty of famous figures came here to die.

Palaces and historic buildings, including the houses of Goethe and Schiller, stand as a legacy of that area and were in 2008 collectively designated as the Classical Weimar UNESCO World Heritage Site. The City Palace, known locally as the Residenz Schloss, houses a museum and art gallery that depict Weimar’s Golden Age. The Duchess Anna Amalia Library houses a major collection of German literature and historical documents. 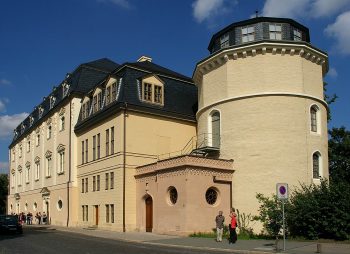 One of the library’s most famous patrons was Johann Wolfgang von Goethe, who worked there from 1797 to 1832. The library also includes the world’s largest Faust collection. The Duchess’s significant 13,000-volume music collection is also available in the library.

In World War II, most of the collection was housed elsewhere to preserve it from Allied bombing.

Today, the library is a public research library for literature and art history. The main focus is German literature from the Classical and the late Romantic eras.