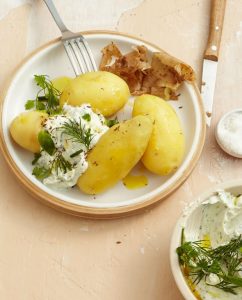 Potatoes with Quark, photo via essen-und-trinken.de

Fresh boild potatoes combined with the creamy quark make for a wonderful snack or side dish. Perfect springtime dish for vegetarians and those who mind their waistline! 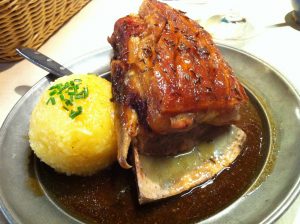 Schäufele (also “Schäuferle”, “Schüfeli”, “Schäuferla” or “Schäufelchen”) is a traditional dish from the south of Germany. It is made from the pig’s shoulder meat, which gives the dish its name, “Schäufele”. The meat is cured and smoked before it is simmered in a broth of water, red wine, onions, bay laurel, cloves and other spices. 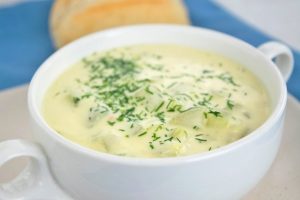 Cucumbers are not just for salads! With this warm cucumber soup you bring variety to your table. This simple recipe from Saxony-Anhalt takes so little time to prepare.

Döppekooche/Döbbekooche is a form of potato cake made of grated potatoes, finely minced onions, eggs and spices and cover in sausage pieces or strips of bacon, which is baked in a cast-iron pot (a döppe) like a cake (kuchen) and served in slices. The resulting potato-onion-egg mix is then baked in the oven for about 2 hours until it forms a crust, considered to be the best part of he dish. Purists insist that the dish should not be stirred during the baking period in order to keep the crust intact, however, it is also acceptable to stir it so as to distribute the crust throughout the dish.

For the Apple Sauce
400g apples
Juice of ½ lemon
1½ tbsp sugar
A little butter and salt, to serve 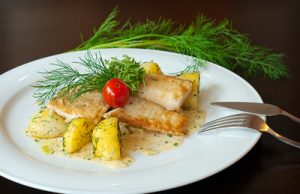 Eel in dill sauce is a common dish from the Mecklenburg-Vorpommern region of Germany. 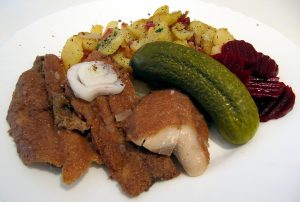 Pronounced /ˈbrɑːtˌheɪrɪŋ/, Brathering is a popular dish from northern Germany made of fried fresh herrings that marinate for several days before serving. Serve for lunch with fried potatoes. 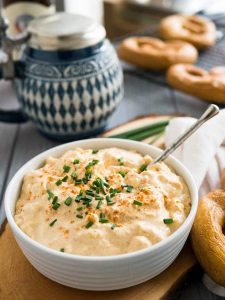 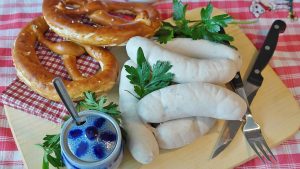 A Weißwurst, literally white sausage, is a traditional Bavarian sausage made from minced veal and pork back bacon. The Weißwurst was created in Munich on February 22, 1857, and has since become a very important part of Bavaria cooking and lifestyle. Legend has it that the Weißwurst was invented by mistake in 1857, when an innkeeper in Munich ran out of sheep casings for his Bratwürste and in order to feed his hungry guests, used tough and chewy pork casings instead. It is usually flavored with parsley, lemon, mace, onions, ginger, and cardamom, although there are some variations. Then the mixture is stuffed into pork casings and separated into individual sausages measuring about ten to twelve centimeters in length and three to four centimeters in thickness.

As they are very perishable, Weißwürste traditionally were manufactured early in the morning and prepared and eaten as a snack between breakfast and lunch; there is a saying that the sausages should not be allowed to hear the noon chime of the church bells. Traditionally, Weißwürste may only be served until midday because preservatives are not used, the meat is not smoked, and hence the sausage is made fresh every day. Indeed, they are sometimes called morning sausages. Before modern refrigeration technologies, in summertime the sausages would go bad before nightfall. Even today, most Bavarians never eat Weißwürste after lunchtime (though it is perfectly acceptable to have a lunch consisting of Weißwürste at, say, half past one).

The sausages are heated in water—well short of boiling—for about ten minutes, which will turn them greyish-white because no color-preserving nitrite is used in Weisswurst preparation. 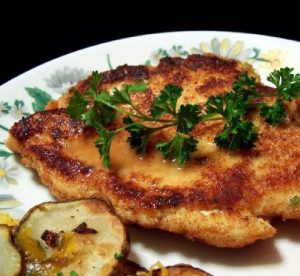 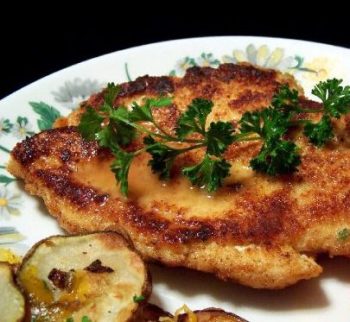 While veal is the traditional choice for authentic German Wiener Schnitzel, chicken or pork is an easy and delicious substitution. And this pan-seared schnitzel is a lightened up version of the favorite fried cutlets, yet is just as tender and yummy as its counterpart. 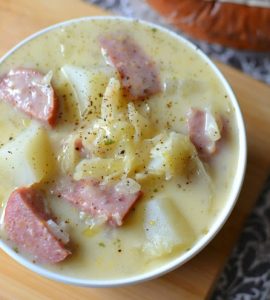 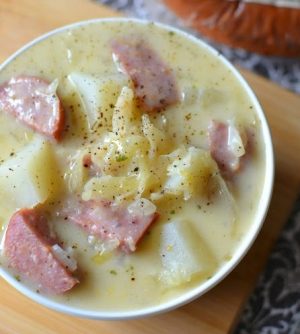 This creamy sausage, potato and sauerkraut soup is a little taste of Oktoberfest you can have any time of the year!