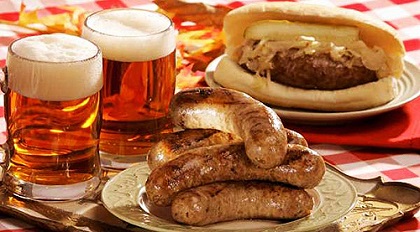 What comes to mind when you think about German cuisine? Right, Sauerkraut and Bratwurst, Black Forest Cherry cake and beer, lots and lots of German beer.

However that would be a huge generalization and simplification, because nowadays things have changed towards lighter cooking, reviving of the regional cuisines in Germany. German appreciation of healthy, well-prepared foods served with care is well known. Everyone who loves to have a good meal will be impressed by German cooking.

Though traditional dishes like dumplings, Wurst, pastries, and beer may make Germany seem the worst possible place to eat healthily, in reality, restaurants are offering foreign foods and neue Küche (modern cuisine). Chefs trained in Switzerland, France, or Italy return to Germany to open Continental restaurants, and Italians and Turks, many of whom originally came to Germany as “guest workers,” own restaurants featuring their own culinary traditions. There are a lot of differences in cooking traditions with corned beef, potatoes, beet roots, herring, eel soup in the north and Spargel, Braten, Spätzle and Brotzeit, a late breakfast with those wonderful brown breads and Wurst, in the south.

Germans favor hearty meals including meat, such as pork, beef and poultry, in that order of popularity. The average person in Germany consumes up to 72 pounds of meat a year. Meat is usually pot-roasted and consumed as sausages. There are more than 1500 different types of sausage in Germany.

Breakfast (Frühstück) commonly consists of bread, toast, and/or bread rolls (the term for which varies a lot by region, Brötchen, Semmeln, Schrippen, Wecken or Rundstücke being among the most common) with jam (“Marmelade” or “Konfitüre”), marmalade or honey, eggs, and strong coffee or tea (milk, cocoa or juice for children). Deli meats, such as ham, salted meats and salami, are also commonly eaten on bread in the morning, as are various cheeses. A variety of meat-based spreads such as Leberwurst (literally liver-sausage) can be found during breakfast as well.

Traditionally, the main meal of the day has been lunch (Mittagessen), eaten around noon. Dinner (Abendessen or Abendbrot) was always a smaller meal, often consisting only of a variety of breads, meat or sausages, cheese and some kind of vegetables, similar to breakfast, or possibly sandwiches. However, in Germany, as in other parts of Europe, dining habits have changed over the last 50 years. Today, many people eat only a small meal in the middle of the working day at work and enjoy a dinner in the evening at home with the whole family.

Vegetables are often eaten in stews or vegetable soups, but can also be served as a side dish. Carrots, turnips, spinach, peas, beans, and many types of cabbage are very common. Fried onions are a common addition to many meat dishes throughout the country. Potatoes, while a major part of the diet, are usually not counted among vegetables by Germans. Asparagus, especially white asparagus known as Spargel, is particularly enjoyed in Germany as a side dish or as a main meal. Sometimes restaurants will even devote an entire menu to nothing but Spargel, when it is the right season (late spring).

The other kind of side dish, noodles, are usually thicker than Italian pasta. Especially in the south-western part of the country, the predominant variety of noodles is Spätzle which contain a very large amount of yolk. Besides noodles, potatoes and dumplings (Klöße or Knödel) are very common, especially in the south. Potatoes are most often served boiled in salt water, but mashed and fried potatoes also are traditional, and french fries have now become very common.

Speaking of beverages, we must mention beer and wine. Beer is very common throughout all parts of Germany, with many local and regional breweries producing a wide variety of beers. It is generally not very expensive and of good quality. For variety and quality, German beer is unequaled. The world’s oldest brewery is in Bavaria, but other regions in Germany have proud beer-making traditions. Export beers and the rather more bitter Pils, the most popular type of beer, are also produced in Berlin, Hamburg, the Ruhr, Hesse, and Stuttgart. Altbier, a very early product of the brewer’s art, can be found today all over Germany.

Good German wine is renowned for its natural lightness and its delicate balance of sweetness and acidity. Most vineyards flourish on steep hillsides, protected from harsh winds by wooded neighboring hills, especially on the banks of the Rhine and the Mosel rivers and their tributaries. The vineyards profit from the warmth reflected off the sunlit water. The slow maturing of the grapes gives German wines their typical fresh, fruity acidity. 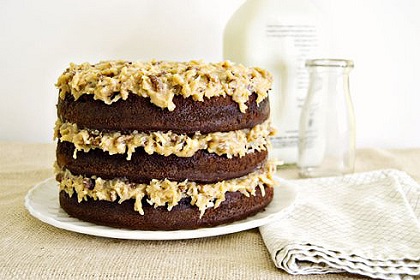 A wide variety of cakes are prepared throughout Germany, most commonly made with fresh fruit. Apples, plums, strawberries, and cherries are used regularly on cakes. Schwarzwälder Kirschtorte (Black Forest Cake) is another very well-known cake. German doughnuts (which have no hole) are usually balls of dough with jam or other fillings inside, and are known as Berliner or Krapfen depending on the region. German Chocolate Cake is a layered chocolate cake filled and topped with a coconut-pecan frosting. This cake is actually not a traditional German dessert, despite its name. The original recipe was sent by a homemaker in 1957 to a newspaper in Texas. It used Baker’s German’s Sweet Chocolate, which was created in 1852 by an Englishman named Samuel German for the Baker’s chocolate brand. The apostrophe was accidentally dropped in subsequent publications, creating the German Chocolate Cake we know today.

Bread is a big part of the German diet, and usually eaten for breakfast and as sandwiches in the evening, rarely as a side dish for the main meal. The importance of bread (Brot) in German cuisine is also illustrated by words such as Abendbrot (supper, literally Evening Bread) and Brotzeit (snack, literally Bread Time). In fact, one of the major complaints of German expatriates in many parts of the world is their inability to find acceptable local breads. German bakeries produce about 6,000 types of breads and approximately 1,200 different types of pastry.

Bread is served with almost every (non-main)-meal. Bread is not considered a side dish and is considered important for a healthy diet.

Germany’s most popular breads are:

Darker, rye-dominated breads such as Vollkornbrot or Schwarzbrot are typical of German cuisine. Pumpernickel, a steamed bread, is internationally well-known, although not representative of German black bread as a whole.

There are hundreds of different dishes and beverages many of which are typical only to some German regions. You are not likely to find many of these dishes in any other country than Germany. From well-known favorites to regional surprises, find a wealth of German recipes here.