Death of Wilhelm Bleek in Berlin, Germany. The philologist, Bleek moved to Africa after his studies and spent his life working on the study of South African languages. He has been referred to as “the father of Bantu Philology.” 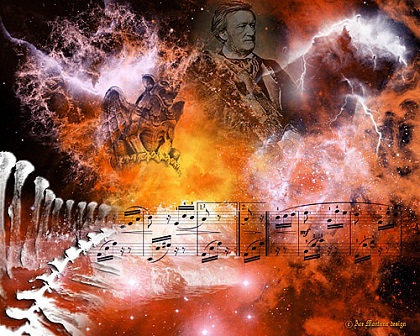 Richard Wagner‘s opera Götterdämmerung is produced for the first time in Bayreuth. Götterdämmerung, WWV 86D, is the last in Richard Wagner’s cycle of four music dramas titled Der Ring des Nibelungen. It received its premiere at the Bayreuth Festspielhaus on 17 August 1876, as part of the first complete performance of the Ring.

Birth of Karl I in Persenbeug Castle, Austria. Karl was the last ruler of the Austro-Hungarian Empire. He ruled from 1916 to 1918 (the end of WWI).

Having been suspected of having been involved in the assassination attempt on Hitler, the western commander of German forces General Günther von Kluge is relieved of command. He commits suicide on August 18.

Death of Ludwig Mies van der Rohe (Ludwig Mies) in Chicago (born in Aachen, Germany). Van der Rohe was one of the leading architects of the early 20th century. He started his life in architecture at age 15 as an apprentice to an architect in Aachen. He is noted for his two desiderata, “architectural integrity” and “structural honesty”. He pioneered the steel and glass style of skyscrapers. In 1930 he was appointed director of the Bauhaus in Dessau. It was he who closed the Bauhaus in 1933 before the Nazis could close it. In 1937 he immigrated to the United States. He settled in Chicago at the Illinois Institute of Technology (then called the Armour Institute). Some of his noted buildings are: in Chicago, the Lake Shore Drive Apartments and the Seagram Building in New York City (1956-58). Later he designed the Bacardi Building in Mexico City (1961), the Federal Center in Chicago (1964), the Public Library in Washington D.C. (1967) and the New National Gallery in Berlin (1968).

Death of Rudolf Hess in Spandau prison, Berlin. Hess joined the Nazi Party in 1920 and ultimately became the deputy Führer. Hess flew alone to England in a small plane in 1941 during World War II. He had a wild idea that if he could only meet Churchill, he could persuade him to come over to Germany’s side in the war, or at least withdraw from the war. He was arrested as soon as he landed in England and put into prison. He stayed in prison in England until the end of the war, when he was tried as a war criminal at the Nürnberg trials. He was sentenced to life in prison. He served that sentence in Berlin in Spandau prison.