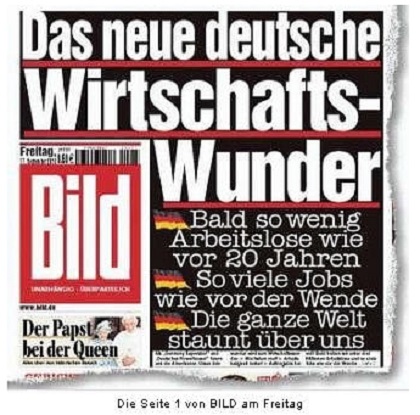 The economic reforms and the new West German system received powerful support from a number of sources: investment funds under the European Recovery Program, more commonly known as the Marshall Plan; the stimulus to German industry provided by the diversion of other Western resources for Korean War production; and the German readiness to work hard for low wages until productivity had risen. But the essential component of success was the revival of confidence brought on by Erhard’s reforms and by the new currency.

The West German boom that began in 1950 was truly memorable. The growth rate of industrial production was 25.0 percent in 1950 and 18.1 percent in 1951. Growth continued at a high rate for most of the 1950s, despite occasional slowdowns. By 1960 industrial production had risen to two-and-one-half times the level of 1950 and far beyond any that the Nazis had reached during the 1930s in all of Germany. GDP rose by two-thirds during the same decade. The number of persons employed rose from 13.8 million in 1950 to 19.8 million in 1960, and the unemployment rate fell from 10.3 percent to 1.2 percent.

Labor also benefited in due course from the boom. Although wage demands and pay increases had been modest at first, wages and salaries rose over 80 percent between 1949 and 1955, catching up with growth. West German social programs were given a considerable boost in 1957, just before a national election, when the government decided to initiate a number of social programs and to expand others.

In 1957 West Germany gained a new central bank, the Deutsche Bundesbank, generally called simply the Bundesbank, which succeeded the Bank Deutscher Länder and was given much more authority over monetary policy. That year also saw the establishment of the Bundeskartellamt (Federal Cartel Office), designed to prevent the return of German monopolies and cartels. Six years later, in 1963, the Bundestag, the lower house of Germany’s parliament, at Erhard’s urging established the Council of Economic Experts to provide objective evaluations on which to base German economic policy.

The West German economy did not grow as fast or as consistently in the 1960s as it had during the 1950s, in part because such a torrid pace could not be sustained, in part because the supply of fresh labor from East Germany was cut off by the Berlin Wall, built in 1961, and in part because the Bundesbank became disturbed about potential overheating and moved several times to slow the pace of growth. Erhard, who had succeeded Konrad Adenauer as chancellor, was voted out of office in December 1966, largely–although not entirely–because of the economic problems of the Federal Republic. He was replaced by the Grand Coalition consisting of the Christian Democratic Union (Christlich Demokratische Union–CDU), its sister party the Christian Social Union (Christlich-Soziale Union–CSU), and the Social Democratic Party of Germany (Sozialdemokratische Partei Deutschlands–SPD) under Chancellor Kurt Georg Kiesinger of the CDU. 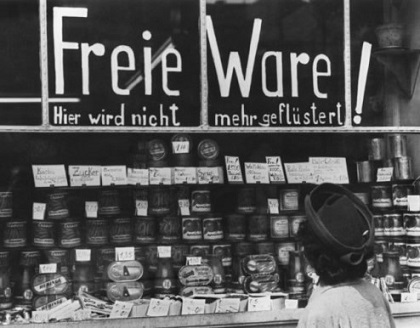 Under the pressure of the slowdown, the new West German Grand Coalition government abandoned Erhard’s broad laissez-faire orientation. The new minister for economics, Karl Schiller, argued strongly for legislation that would give the federal government and his ministry greater authority to guide economic policy. In 1967 the Bundestag passed the Law for Promoting Stability and Growth, known as the Magna Carta of medium-term economic management. That law, which remains in effect although never again applied as energetically as in Schiller’s time, provided for coordination of federal, Land , and local budget plans in order to give fiscal policy a stronger impact. The law also set a number of optimistic targets for the four basic standards by which West German economic success was henceforth to be measured: currency stability, economic growth, employment levels, and trade balance. Those standards became popularly known as the magisches Viereck, the “magic rectangle” or the “magic polygon.”

Schiller followed a different concept from Erhard’s. He was one of the rare German Keynesians, and he brought to his new tasks the unshakable conviction that government had both the obligation and the capacity to shape economic trends and to smooth out and even eliminate the business cycle. Schiller’s chosen formula was Globalsteuerung, or global guidance, a process by which government would not intervene in the details of the economy but would establish broad guidelines that would foster uninterrupted non-inflationary growth.

Schiller’s success in the Grand Coalition helped to give the SPD an electoral victory in 1969 and a chance to form a new coalition government with the Free Democratic Party (Freie Demokratische Partei–FDP) under Willy Brandt. The SPD-FDP coalition expanded the West German social security system, substantially increasing the size and cost of the social budget. Social program costs grew by over 10 percent a year during much of the 1970s, introducing into the budget an unalterable obligation that reduced fiscal flexibility (although Schiller and other Keynesians believed that it would have an anticyclical effect). This came back to haunt Schiller as well as every German government since then. Schiller himself had to resign in 1972 when the West German and global economies were in a downturn and when all his ideas did not seem able to revive West German prosperity. Willy Brandt himself resigned two years later.


Helmut Schmidt, Brandt’s successor, was intensely interested in economics but also faced great problems, including the dramatic upsurge in oil prices of 1973-74. West Germany’s GDP in 1975 fell by 1.4 percent (in constant prices), the first time since the founding of the FRG that it had fallen so sharply. The West German trade balance also fell as global demand declined and as the terms of trade deteriorated because of the rise in petroleum prices.

By 1976 the worst was over. West German growth resumed, and the inflation rate began to decline. Although neither reached the favorable levels that had come to be taken for granted during the 1950s and early 1960s, they were accepted as tolerable after the turbulence of the previous years. Schmidt began to be known as a Macher (achiever), and the government won reelection in 1976. Schmidt’s success led him and his party to claim that they had built Modell Deutschland (the German model).

But the economy again turned down and, despite efforts to stimulate growth by government deficits, failed to revive quickly. It was only by mid-1978 that Schmidt and the Bundesbank were able to bring the economy into balance. After that, the economy continued expanding through 1979 and much of 1980, helping Schmidt win reelection in 1980. But the upturn proved to be uneven and unrewarding, as the problems of the mid-1970s rapidly returned. By early 1981, Schmidt faced the worst possible situation: growth fell and unemployment rose, but inflation did not abate.

By the fall of 1982, Schmidt’s coalition government collapsed as the FDP withdrew to join a coalition led by Helmut Kohl, the leader of the CDU/CSU. He began to direct what was termed die Wende (the turning or the reversal). The government proceeded to implement new policies to reduce the government role in the economy and within a year won a popular vote in support of the new course.

Within its broad policy, the new government had several main objectives: to reduce the federal deficit by cutting expenditures as well as taxes, to reduce government restrictions and regulations, and to improve the flexibility and performance of the labor market. The government also carried through a series of privatization measures, selling almost DM10 billion in shares of such diverse state-owned institutions as VEBA, VIAG, Volkswagen, Lufthansa, and Salzgitter. Through all these steps, the state role in the West German economy declined from 52 percent to 46 percent of GDP between 1982 and 1990, according to Bundesbank statistics.

Although the policies of die Wende changed the mood of the West German economy and reinstalled a measure of confidence, progress came unevenly and haltingly. During most of the 1980s, the figures on growth and inflation improved but slowly, and the figures on unemployment barely moved at all. There was little job growth until the end of the decade. When the statistics did change, however, even modestly, it was at least in the right direction.

Nonetheless, it also remained true that West German growth did not again reach the levels that it had attained in the early years of the Federal Republic. There had been a decline in the growth rate since the 1950s, an upturn in unemployment since the 1960s, and a gradual increase in inflation except during or after a severe downturn. Global economic statistics also showed a decline in West German output and vitality. They showed that the West German share of total world production had grown from 6.6 percent in 1965 to 7.9 percent by 1975. Twelve years later, in 1987, however, it had fallen to 7.4 percent, largely because of the more rapid growth of Japan and other Asian states. Even adding the estimated GDP of the former East Germany at its peak before unification would not have brought the all-German share above 8.2 percent by 1989 and would leave all of Germany with barely a greater share of world production than West Germany alone had reached fifteen years earlier.

It was only in the late 1980s that West Germany’s economy finally began to grow more rapidly. The growth rate for West German GDP rose to 3.7 percent in 1988 and 3.6 percent in 1989, the highest levels of the decade. The unemployment rate also fell to 7.6 percent in 1989, despite an influx of workers from abroad. Thus, the results of the late 1980s appeared to vindicate the West German supply-side revolution. Tax rate reductions had led to greater vitality and revenues. Although the cumulative public-sector deficit had gone above the DM1 trillion level, the public sector was growing more slowly than before. The year 1989 was the last year of the West German economy as a separate and separable institution. From 1990 the positive and negative distortions generated by German unification set in, and the West German economy began to reorient itself toward economic and political union with what had been East Germany. The economy turned gradually and massively from its primarily West European and global orientation toward an increasingly intense concentration on the requirements and the opportunities of unification.