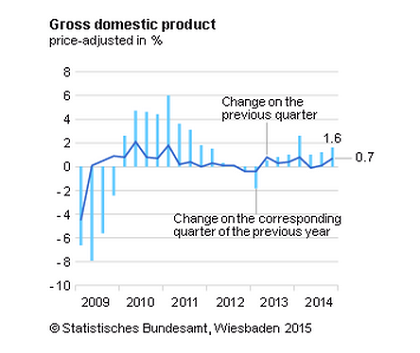 The German economy is full of contradictions. It is modern but old-fashioned. It is immensely powerful but suffers from serious structural weaknesses. It is subject to national laws and rules but is so closely tied into the European Union that it is no longer truly independent. It has a central bank that controls European monetary policy and has a deepening impact on the global economy but that also insists on making its decisions mainly on the basis of domestic considerations. Finally, although Germany must compete against highly efficient economies outside its own continent, it continues to carry the expense and burden of traditional industries that drain resources that could be better used elsewhere.

The German economy as it is known today is an outgrowth of the 1990 merger between the dominant economy of the Federal Republic of Germany (FRG, or West Germany) and that of the German Democratic Republic (GDR, or East Germany). This merger will one day produce a massive economic entity that will constitute the fulcrum of Europe as a production center, as well as a transportation and communications center. But each partner brings different elements to the mix, and the merger has proved difficult and costly. The merger will dominate Germany’s economic policy and reality until well into the next century.

The record of the West German economy during the four decades before unification shows a signal achievement. The first decade, that of the 1950s, had been that of the “economic miracle.” The second decade, that of the 1960s, had seen consolidation and the first signs of trouble. The 1970s had brought the oil shocks, the generous social programs, the rising deficits, and finally a loss of control. In the 1980s, new policies at home and a more stable environment abroad had combined to put West Germany back on the path of growth.

The East German economy had been a powerhouse in Eastern Europe, where Moscow had relied on it to produce machine tools, chemicals, and electronics. But it had grown increasingly inefficient, and its currency had become worthless outside its own borders. East Germans had felt frustrated at their lack of true material well-being, as well as their lack of freedom. They joined their economy enthusiastically with that of West Germany in 1990. The merger gave them a rude shock, however, in part because of the simultaneous collapse of East Germany’s markets in the Soviet empire and in part because of the inefficiencies that the communist system had left behind.

The united German economy is a dominant force in world markets because of the strong export orientation that has been part of the German tradition for centuries. Although the burdens of unification have cut into West Germany’s traditional export surplus, German industry continues to produce some of the best machine tools, automobiles, trucks, chemicals, and engineering products in the world. Its management culture, which mingles competition and cooperation, stresses quality and durability above all other virtues. Because many German companies are small or medium-sized, they are able to concentrate on a few production lines that compete effectively even if they are expensive.

The German culture of cooperation also extends to the relations between the private sector and the government. The social market economy, in which all elements of the system cooperate, stresses the importance of having all parties to the social contract work together. Workers play a role in management. Managers mingle with workers. The bureaucracy attempts to create an environment in which all parties serve a common purpose. Although the rules intended to prevent the recurrence of the German cartel system of the last century are strictly enforced by the Bundeskartellamt (Federal Cartel Office), certain practices that would be forbidden under United States antitrust laws are widely tolerated in Germany.

The dominant force in the German economy is the banking system. The central bank, the Bundesbank, is deeply committed to maintaining the value of the nation’s currency, the deutsche mark, even at some potential cost to economic growth. It fears inflation above all other ills and is determined to prevent the recurrence of Germany’s ruinous Great Inflation of the early 1920s. Private banks also play an important role. German industrial and service companies rely much more on bank finance than on equity capital. The banks provide the money and in turn sit on the supervisory boards of most of Germany’s corporations. From that vantage point, they stress the traditional banking virtues of slow but steady and nonrisky growth. Their influence and thinking permeate the economy.

German agriculture is not as strong as German industry. It is a relatively small part of the gross domestic product (GDP) and is heavily subsidized by the EU’s Common Agricultural Policy (CAP) and by the German government itself. The accession of East Germany to a united Germany expanded the relative size of the agricultural sector and somewhat improved its efficiency, but Germany is not an agricultural producer like Spain or Italy.

West Germany developed a system of high wages and high social benefits that has been carried over into united Germany. The extent and the generosity of its social programs now leave Germany at a competitive disadvantage with respect to the states of Eastern Europe and Asia. German labor costs are above those of most other states, not because of the wages themselves–which are high by global standards but not out of line with German labor productivity–but because of social costs, which impose burdens equal to the wages themselves. Thus, German companies and German workers must decide either to abandon some of the social programs that are at the core of the revered social market economy or to risk losing out in the increasingly intense global competition of the 1990s and beyond. The Germans have not solved this problem, but they are beginning to address it more seriously than before.