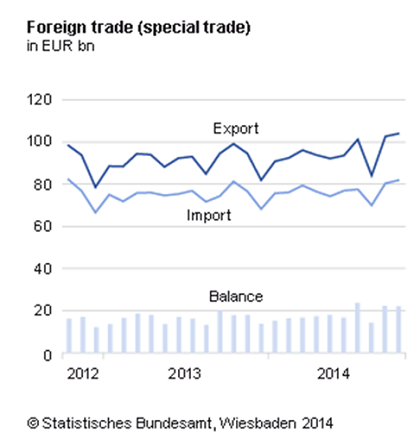 Ever since its creation in 1949, the Federal Republic of Germany (FRG), or West Germany, as it was also called until its unification in 1990 with the German Democratic Republic (GDR, or East Germany), has played an increasingly important role in the world economy. Consistently among the most important trading nations in the world, Germany often derives a higher share of its gross domestic product (GDP) from exports than any other major state. The Federal Republic plays an even more important role in international financial matters. Its currency, the deutsche mark, is the second most important currency in the world after the United States dollar.

Germany does not act alone in international economic matters. Instead, it usually acts through Europe. West Germany was a founding member of the European Coal and Steel Community (ECSC) and of the follow-on European Community (EC), known since late 1993 as the European Union (EU). Germany increasingly makes its international policies in conjunction and consultation with other EU members. More than half of its trade is with other EU states, and the deutsche mark is the anchor of the European Monetary System (EMS) and of its planned follow-on, the European Monetary Union (EMU).

Despite its central role in the world economy, Germany has never developed nor sought a high profile as a major international economic player. It receives much less attention than Japan in United States newspapers and economic journals, even though it wields as least as much influence in global financial affairs. This relative discretion reflects Germany’s general reticence about projecting itself on the world stage in economic matters and the consistent German wish to integrate its economy into the EU. Germany has benefited from a strikingly benign international economic climate for the past half-century. Despite occasional crises–such as the effects of the United States decision to end the dollar’s link to gold in 1971 and of the “oil shocks” of the 1970s that resulted from exporters’ sharp increases in the price of petroleum–the global economic scene has been remarkably stable in comparison with that of the 1920s and 1930s. This stability has favored the kind of international trading state that West Germany represented and that united Germany is expected to become once unification is complete.

Under United States leadership, the Western world with free-market economies established the International Monetary Fund (IMF) and the World Bank in 1944. In 1947 these nations created a virtually universal trade structure, the General Agreement on Tariffs and Trade (GATT). The combination of open financial and trade systems has helped promote continuous and even dramatic expansion since World War II of world trade and the liquidity of international capital. Nothing could have better suited West Germany and now united Germany. The productive capacities of both East Germany and West Germany always exceeded the absorptive capacity of their respective domestic markets. From the West German standpoint, this characteristic helped to fuel the German export drive and to generate investment capital. It also strengthened the deutsche mark and helped make the German economy internationally prominent.

Although Germany has a global currency and a world-class trade sector, the German economy remains essentially continental in focus. Because the economy lacks the size necessary to deal with the effects of truly massive currency flows, Germany has looked for partners in international economic matters as it has in international strategic and political matters.

The German government and the Bundesbank, Germany’s central bank, are active participants in formal and informal international institutions and arrangements concerned with global finance and the coordination of national economic policies. West Germany was a founding member of the association of free-market economies known as the Group of Five (G-5), which later became the Group of Seven (G-7). But the German government has also had to acknowledge that it cannot direct the policies of the independent Bundesbank, which are more often based on Germany’s domestic needs than on the wishes of the outside world.