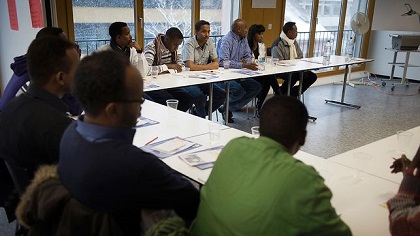 As of early 1994, approximately 6.8 million registered foreigners resided in Germany. Turks made up the largest group (1.9 million), followed by immigrants from the former Yugoslavia (930,000), Italians (565,000), Greeks (350,000), Poles (260,000), and Austrians (185,000). About 25 percent of these foreign residents, most of whom were born in Germany, are under the age of eighteen. Because of the higher birth rate of foreigners, one of every ten births in Germany is to a foreigner. However, because recruiting of Gastarbeiter stopped in 1973 at the onset of a worldwide recession, most foreign workers are middle-aged and have lived in Germany for several decades.

The foreign population is not distributed evenly. More than two-thirds live in the Länder of North Rhine-Westphalia, Baden-Württemberg, and Bavaria, where in 1990 they made up 9, 10, and 7 percent of the population, respectively. Foreigners live mainly in urban areas; in 1989 approximately 23 percent of foreign residents lived in Hamburg and Berlin. Foreigners often live in particular areas of large cities. (For example, Kreuzberg in Berlin and Kalk in Cologne both have large Turkish communities.) There are few foreigners in the new Länder. Of the roughly 190,000 foreigners living in the former GDR in 1989 because of work contracts, many have since been repatriated to Vietnam, Mozambique, Cuba, and other developing countries that were friendly to the GDR regime.

Foreigners began arriving in West Germany in large numbers in the 1960s after the construction of the Berlin Wall ended migration from East Germany. Recruited mainly from a number of countries in southern Europe, Gastarbeiter were not expected to stay beyond the terms of their work permits. However, many opted to remain in West Germany and subsequently brought their families there to live. As a result, and owing to higher birth rates, the foreign population in Germany has increased substantially (see table 9, Appendix). By offering financial incentives, West German authorities hoped to encourage some Gastarbeiter to return to their native countries, but relatively few took advantage of these provisions. A tightening of entry restrictions also caused many to remain in Germany rather than risk not being readmitted after spending time in their home country.

Most Germans do not see their country as a land of immigration like the United States or Canada, and no demographic or social issue has generated greater controversy than the presence of foreigners in the Federal Republic. In an opinion poll taken in 1982, two-thirds of West Germans said that there were too many foreigners in Germany, and one-half thought that foreigners should be sent back to their countries of origin. In 1992 another poll found that the “foreigner problem” ranked as the most serious issue for western Germans and was third in importance for eastern Germans.

According to the foreigners law that went into effect in mid-1993, foreigners living in Germany for fifteen years may become German citizens if they have no criminal record and renounce their original citizenship. Young foreigners who have resided eight years in Germany may become citizens if they have attended German schools for six years and apply for citizenship between the ages of sixteen and twenty-three. Usually, however, German citizenship depends not on where one is born (ius solis) but on the nationality of the father or, since 1974, on the mother (ius sanguinis). Thus, to many, German citizenship depends on being born German and cannot rightfully be acquired through a legal process. This notion makes it practically impossible for naturalized citizens or their children to be considered German. Some reformers advocate eliminating the concept of German blood in the 1913 law regulating citizenship, but the issue is an emotional one, and such a change has little popular support.